Following a protest on Auckland’s harbour bridge, the Government has given the green light to a second harbour crossing for cyclists and pedestrians while other transport projects are axed nationwide 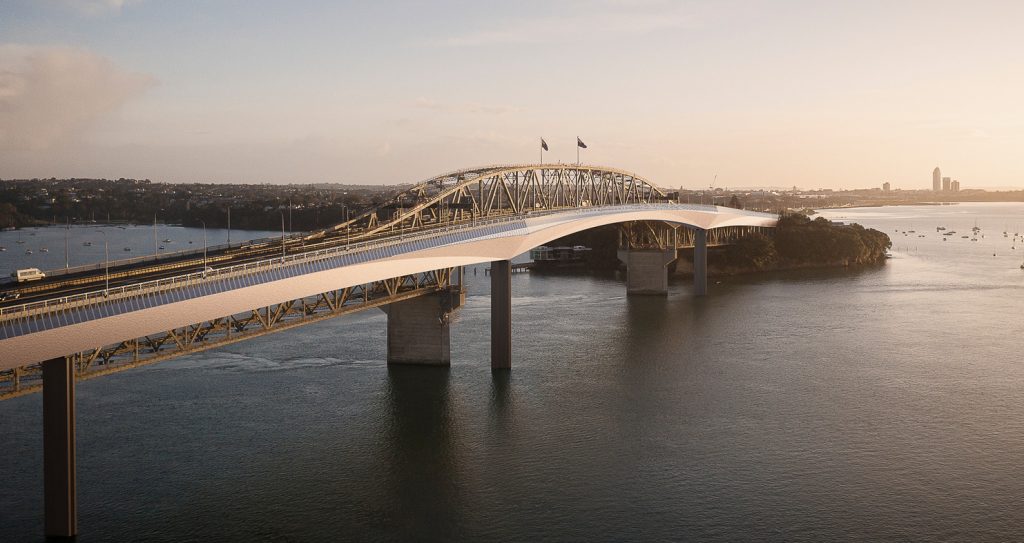 Transport Minister Michael Wood has announced the Northern Pathway, a bridge exclusively for cyclists and pedestrians to travel between Central Auckland’s Westhaven and the North Shore. The project is expected to cost $685m and will take up to five years to complete, with construction to begin as early as mid-2022 using the COVID-19 Recovery (Fast-track Consenting) Act.

National’s Infrastructure spokesperson Andrew Bayly says it is unacceptable that much-needed transport projects across New Zealand are being cancelled because Labour is pushing ahead with a half-baked add-on to the Auckland Harbour Bridge.

“Cancelling Mill Road will leave South Aucklanders fighting gridlock for decades to come. People in Northland and the Bay of Plenty will now also miss out on much-needed transport projects in their regions.”

The Canterbury floods have also drawn attention to the fragility of transport infrastructure in the South Island. The closure of the Ashburton bridge saw drivers taking detours as long as 13 hours through the West Coast region to get in and out of Christchurch.

While there are other transport priorities that clearly need more urgent attention, an option for cyclists and pedestrians to cross Auckland’s Waitematā Harbour is still long overdue. The Northern Pathway finally addresses this, though in the form of an entirely new bridge at the cost of $685m.

“We need this transport connection to move ahead but it isn’t technically possible to attach it to the existing bridge without putting the whole structure at risk,” says Transport Minister Michael Wood.

The originally planned Skypath, a pedestrian/cycleway connected to the Auckland Harbour Bridge, was deemed impossible by geotechnical investigations and testing. The existing piers were found to be unable to accommodate the extra weight without considerable modifications to counter balance the increased load, involving additional risk to the bridge.

“A stand-alone structure is the safest option that will not only provide a walking and cycling option for commuters but creates an outstanding piece of tourism infrastructure,” Wood says.

Using lanes on the existing harbour bridge for cyclists and pedestrians is another alternative, though the level of congestion caused by the Liberate the Lane protest where cyclists occupied a lane on the harbour bridge already suggests this will only worsen Auckland’s transport issues.

Greater Auckland does argue that the protest had been planned months in advance, and yet Waka Kotahi chose to leave the bridge in its standard configuration instead of switching to 3+3, meaning northbound traffic went down to two lanes. This couldn’t have been better planned to maximise disruption and generate headlines about “traffic chaos”.

Yet even with better traffic management, last year’s incident where a truck hit one of the bridge’s steel struts, causing its closure, demonstrates just how easily Auckland can be brought to a standstill. These issues will hardly be addressed by a second crossing that only services cyclists and pedestrians.

“It’s unclear why Labour is opting for a piecemeal solution when we know the current bridge has serious structural issues,” National’s Transport spokesperson Michael Woodhouse says.

“If the second harbour crossing isn’t done properly then Aucklanders will be fighting gridlock for decades to come,” says Woodhouse.

Wood says there is planning for an additional Waitematā Harbour Crossing after the Northern Pathway. An initial business case was finished last year, and work is being done on enhancing the Northern Busway and developing an additional crossing that includes rapid transit.

“Given the next crossing is likely to be a tunnel, it would be unsafe to have a walking and cycling link as part of it – that’s why we need to build the Northern Pathway.”

Yet a tunnel crossing, done properly, would surely take enough pressure off the existing harbour bridge to allow a lane for cyclists and pedestrians. This would render the Northern Pathway entirely redundant – a squandering of $685m over the next five years, while the rest of New Zealand is in urgent need of transport investment today.