An innovative solution to Auckland’s water shortage, Mokau Marae risen from the ashes and the collaborative redevelopment of Queens Wharf were among this year’s winners announced by the New Zealand Institute of Building (NZIOB) 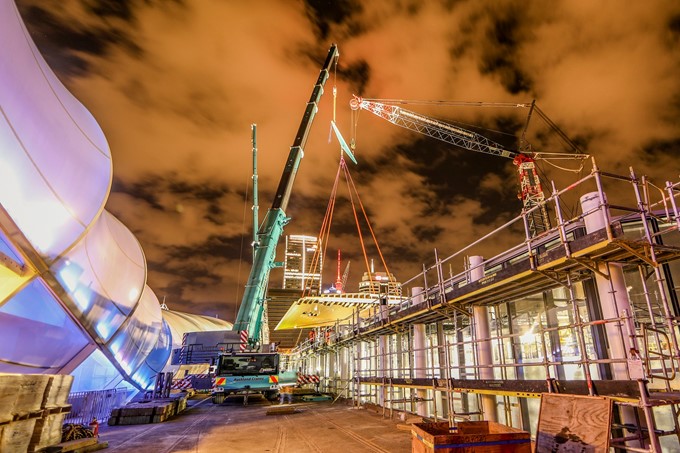 The standard and number of entries in this year’s awards was again particularly impressive, and the projects they have delivered have made a significant contribution to the quality of our built environment, NZIOB Chief Executive Malcolm Fleming says.

“Furthermore, many of those who received recognition are still in the early stages of their careers. This fact demonstrates the rapid career advancement that is possible in the construction industry.

The winner of the GIB® Projects $45M to $75M category, Matt Primm, graduated from university in 2013 and has just completed running a $55M project.”

“Michael Xu, the BCITO Young Achiever, is leading a team of multidisciplinary services engineers for AECOM, a mere five years after graduating with an engineering degree.”

Fleming says a key feature of this year’s entries was the degree to which entrants had embraced new technologies and the impact such technology has had on construction programmes.

“For the first time, this year an entry in the Innovation category won the Supreme Award. That reflects a global surge in technology adoption across construction, driven by the considerable investment into companies developing construction technologies.”

The GIB® Supreme Award was won by Farzam Farzadi from Beca for Digital Delivery Processes on the Waikato River to Redoubt water supply programme. This project encompassed the design and construction of infrastructure to deliver an additional 50 million litres of treated water per day from the Waikato River to Auckland.

Farzam used innovative technology to compress a three-year design and build to one year, delivering the water supply infrastructure project within the critical and non-negotiable one-year timeframe.

This innovation helped the client, designers, and the construction team coordinate continuously, providing rapid and efficient feedback on the practicality and constructability of the design information each day.

The Judges say it is an exceptional result and had not seen competency like this for a long time.

“Industry outsiders have formed a view that we are the last large industry to undergo digital disruption in a meaningful way,” says Fleming.

“The 2021 Supreme Award winner is an example of the project upside that such innovation yields.”

Farzadi’s project also won the James Hardie Innovation Award, recognising innovation in the industry demonstrated within a project or through an innovative new product or procedure.

The BCITO Young Achievers Award went to Michael Xu from Aurecon NZ. His construction industry career began with a summer internship at Aurecon.

Upon completing his Bachelor of Engineering at Auckland University, Michael joined Aurecon as an electrical engineer. After working on various projects and achieving his Chartered Professional Engineer (CPEng) accreditation, he progressed to project leadership roles.

The Judges say Michael is highly motivated and committed. Five years into his career, he leads a team of multidisciplinary building services engineers on some of New Zealand’s most technically challenging healthcare projects.

The Site Safety & CHASNZ Safety Excellent Award, which celebrates a new product or process that promotes construction safety, was won by Matt Hutchinson and Ricky Ciobanu from Ryman Healthcare for their Vertical Panel Storage Device (VPSD).

The VPSD is a safe storage system for plasterboard panels invented by Matt Hutchinson and developed by his colleague Ricky Ciobanu. It stores plasterboard panels in an upright position to stop stacks from collapsing, reduces wastage, guards against moisture contamination, and prevents overloading floor slabs on multi-storey projects.

The Judges say that Matt Hutchinson and Ricky Ciobanu demonstrated real passion in refining the VPSD concept over the last eight years. VPSD has been designed to improve worksite Safety Standards. They expect to see VPSD become commonplace as the industry realises the benefits to safety and efficiency on construction sites.

The Thermosash Consultants Award was this year awarded to Ben Tomason from Griffiths and Associates for their Mokau Marae Rebuild in Whangarei.

The original Mokau Marae tragically burnt down in 2013. Griffiths and Associates, a local firm that had seen the devasting ruins of the fire, approached the Ngātiwai Trust Board to see if they could support the rebuild. The project faced numerous challenges, had to be undertaken in five stages, and funding constraints meant it took seven years to complete.

The Judges commended Ben Tomason’s leadership of this project. His credibility convinced banks and other agencies to fund the rebuild. Ben was intimately involved throughout, running the funding, the project costing, and the build itself. The project’s success was entirely due to him.

Early on, they identified that the timeline meant all the components needed to be constructed concurrently and that building the canopies at Queens Wharf was impossible. Constructing the canopies offsite, barging them to Queens Wharf and craning them into position reduced the timeframe for canopies installation from three months to five weeks.

The Judges say that the team’s collaboration was particularly impressive on this technically demanding project with short timeframes.

This year the Judges again identified a Category Winner for each of the Cost-band Awards. The winners of these Awards are: