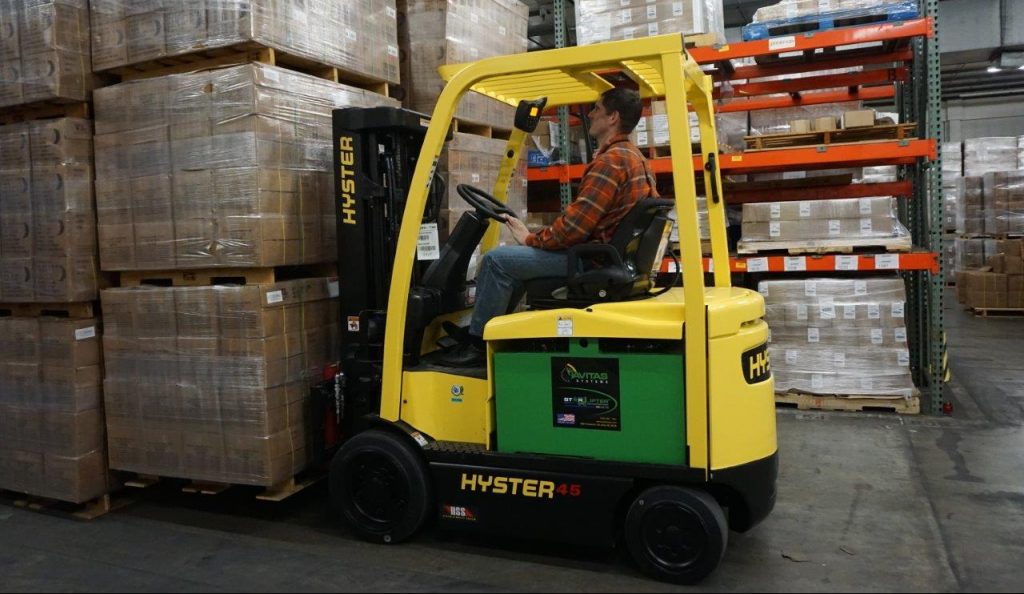 The clean, green and environmentally efficient machinery offers the performance and refuelling speed of typical conventionally powered alternatives, but with the sustainability of electric motors.

The technology is aimed at companies interested in high environmental performance, coupled with the practical convenience and workplace efficiency of rapid refuelling for maximum uptime.

“While hydrogen power – like many new electric motive technologies – is not initially an off-the-shelf solution, Hyster will, in future years, be equipped to work individually with different companies in different industries throughout Australia and New Zealand to develop individually customised packages for them that optimise its outstanding advantages.”

“Because forklifts are vital to industry, it follows that whatever we can do to enhance their use and sustainability is a major step forward for the companies involved, and for the environment of the communities of which they are part,” Fagg says.

“Accordingly, we will work very closely with companies considering the future introduction of hydrogen fuel cell technology to help them choose the facilities and fuel sources necessary to derive the benefits that the technology can offer.”

“Like all early adopters of advanced technologies, including battery-based and other electric technologies, Hyster’s ability to work with customers will be a major asset to help these companies in the efforts to establish the on-site infrastructure necessary for each customer to derive benefits in their particular industry.”

Fagg believes that, not only are these the first hydrogen-powered forklifts in Australia or New Zealand, but also that such practical hydrogen-powered vehicles as these show the way ahead for a whole new generation of future-focussed work vehicles, and perhaps ultimately for passenger vehicles.

“The products are currently only available for distribution in the United States and Canada, with a view to introducing them to the Asia-Pacific region in future years.”

“The Nuvera® fuel cell system is designed and built to provide customer return on investment over the lifecycle of the product.”

“The new hydrogen fuel cell-powered forklifts can be re-fuelled in as quick as three minutes, which saves significant downtime compared with battery-operated forklifts that can take up to 8 hours to recharge.

“This means the whole fleet can be used to its fullest potential – maximising product and operator utilisation – and provide gains in uptime and productivity.”

Fuel cell vehicles are fuelled by a hose from a dispenser in the same way that typical work vehicles and cars and trucks are fuelled at a petrol or diesel bowser.

When the fuel cell is supplied with hydrogen and oxygen, it will generate electricity to power the forklift’s electric motor.

In the process of the hydrogen fuel’s conversion to electricity through a chemical reaction in the cell, electricity is produced, and this is used to power the electric motor that drives the vehicle.

The process is very clean because, unlike a conventional fossil fuel engine, a fuel cell doesn’t burn the hydrogen.

Instead, it’s fused chemically with oxygen producing electricity and water, which is the primary emission from the vehicle giving the vehicle clean, green credentials.

The sustainability delivered by Hyster’s hydrogen fuel cell-powered vehicles may be applicable to an entire range of future-focussed industries, including materials handling, manufacturing, warehousing, distribution and processing operations.

It is also directly relevant to major resources companies (such as mining, oil and gas) that are seeking to reduce their operations’ environmental footprint in remote and sensitive areas, as well as environmentally aware utilities including local authorities, energy, water and waste water engineering facilities and transport and automotive service facilities where workers may be exposed to environmental and workplace OH&S hazards.

Requirements essential to the success of the use of this technology include a steady, cost-effective supply of hydrogen, which can be delivered, generated on-site or employed in a fleet dispenser system.