Oceanix City is a futuristic concept for a floating city which could withstand natural disasters like floods, tsunamis, and hurricanes and house up to 10,000 residents. Its team, Danish studio Bjarke Ingels Group and non-profit company Oceanix believe it could be the future of sustainable living 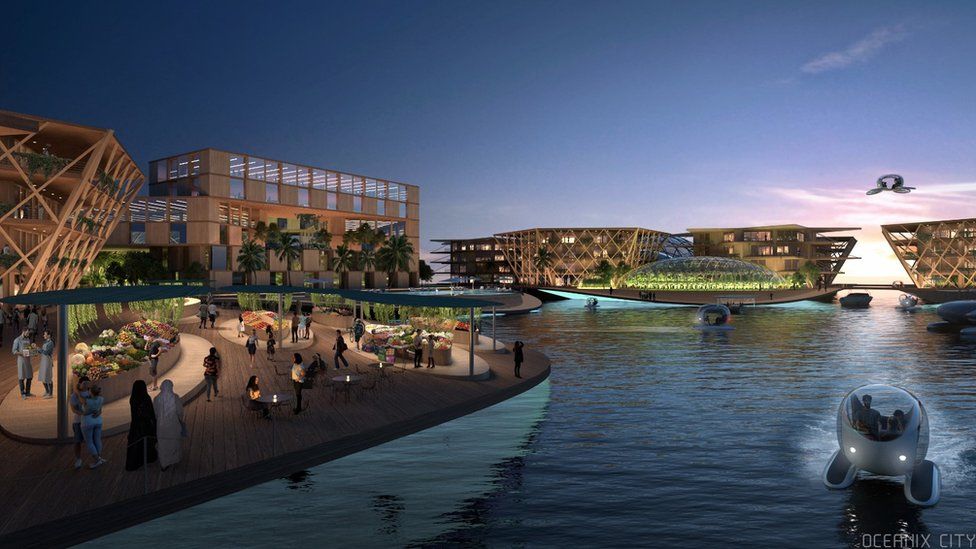 But in the roundtable discussion, convened by UN-Habitat involving marine engineers, scientists, architects and entrepreneurs last week, sustainable floating cities were posed as a solution to such urban challenges.

Oceanix City was unveiled as a connected network of hexagon shaped platforms, anchored to the seafloor.

Remnants of Kevin Costner’s 1995 sci-fi thriller Waterworld aside, the utopian vision would see its residents use 100 per cent renewable energy, eat a plant-based diet grown via ocean farming and use small smart cars to get around.

Islands in the form of a hexagon

The island modules can be linked together and scaled up in configurations to form city blocks or entire cities.

The city would comprise a cluster of platforms that could each hold around 300 residents.

The clusters would be repeated in multiples of six to form a 12-hectare village, and scaled up with the entire city able to house up to 10,000 people.

“Our approaches to development and environmental sustainability in cities need a serious retooling to meet the challenges of today and tomorrow,” UN deputy secretary-general Amina Mohammed said.

“We live in a time when we cannot continue building cities the way New York or Nairobi were built.

“Floating cities can be part of our new arsenal of tools.”

The villages would sit in proximity to major coastal cities.

And in the event of a disaster, the platforms could be towed to safer locations.

“Nine out of 10 of the world’s largest cities will be exposed to rising seas by 2050,” Ingels said.

“The sea is our fate – it may also be our future.”