A request for proposals to construct the Humboldt Cable has been issued, which looks to connect with cable systems across Asia and to other countries and territories including New Zealand 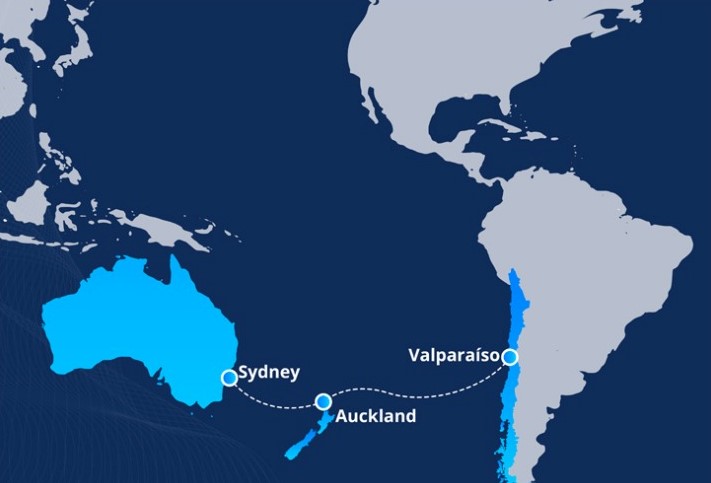 Desarrollo País and H2 Cable are looking to begin construction of the estimated 15,000 km Humboldt Cable, the first to connect Latin America, the Asia Pacific and Oceania.

Initially flagged in late 2021, Humboldt will provide end-to-end connectivity between Valparaiso, Chile and Sydney, Australia, where it will also interconnect with cable systems across Asia. Additional branching stubs will allow for connection to other countries and territories, including Juan Fernandez and Easter Island, as well as New Zealand.

Desarrollo Pais is a state-run infrastructure fund majority owned by the Chilean Government (Fondo de Infraestructura), while H2 Cable is a subsidiary of Singapore-based BW Digital.

The Humboldt Cable will be the most significant piece of subsea infrastructure connecting South America, paving the way for deployment of essential datacenters, AI and other data-driven technologies.

Desarrollo País Chief Executive says their goal is to transform Chile into a digital hub for Latin America.

Accordingly, Desarrollo País and H2 Cable are looking to partner with the world’s best suppliers for turnkey implementation of transoceanic submarine cable systems.

“The project is entering its most challenging stage with the technical definition of the route and schedules for execution now being set, and we have asked that suppliers’ proposals be based on an ‘Open Cable System’ model.”

International Connectivity Services Ltd, the service company of the Hawaiki Group (now wholly-owned by BW Digital), has been engaged to finalize the system design of Humboldt Cable, launch the procurement process and engage with prospective anchor customers.

Depending on responses from the market, Desarrollo País and H2 Cable will make the necessary investments to build and operate the system.

BW Digital Chief Executive says it would become an absolutely critical piece of digital infrastructure for South America, providing unprecedented scale and quality of connectivity with the Asia Pacific and Oceania.”

He added that Humboldt Cable would join a number of large-scale subsea cables promising to reshape the digital landscape throughout the Pacific, including the Hawaiki Transpacific Cable, in service since 2018, and the Hawaiki Nui Cable currently in development.

Share. Twitter Facebook Google+ LinkedIn Email
Previous ArticleWhy over half of construction professionals lack confidence in the future
Next Article How will New Zealand cope with the effects of climate change?