While development applications across the ditch remain buoyant, just 658 projects moved into the construction stages in September. 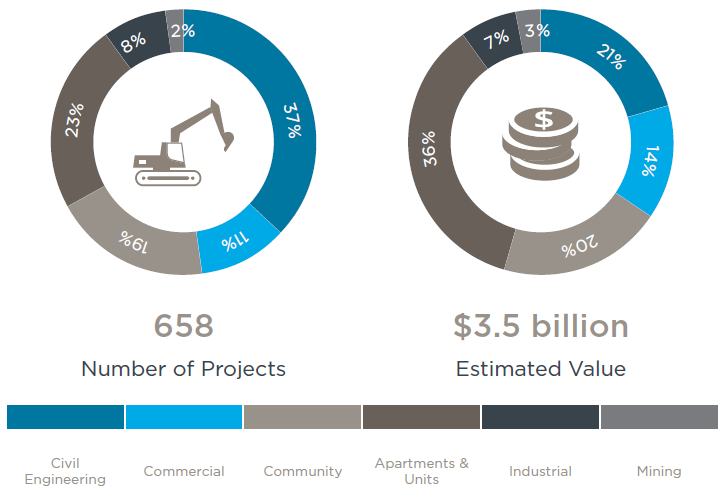 The October Construction Monthly produced by CoreLogic reports that large scale infrastructure in Australia is inflating activity taking place across the construction industry.

CoreLogic captured 2,018 development applications and proposals flowing into the construction pipeline across Australia in September.

While 15.4 percent lower than the number of development applications captured in the previous month, it is well above the five -year average of 1,775.

The total value of development applications was A$11.2 billion over the month.

Again, this construction value is above the five-year average of AU$9.3 billion, and was partially driven by the development proposal for a component of the Cross River Rail Line in Brisbane.

“This is the third consecutive month where the value of construction work entering the pipeline has been inflated by a large civil engineering project.”

“This is far lower than the five-year average of 1,041 projects per month, and is 27.9 percent less than moved into construction in the previous month,” she says.

While all segments outside of commercial building saw a decline, the largest by far was in civil engineering.

The value of civil engineering projects commencing was $722 million, down from $1 billion in the previous month.

“While far fewer projects are currently moving into construction, the resilience of the pipeline may see higher levels of construction commencing over the next 6-12 months,” Ms Owen says.

Disclaimer: In compiling the October Construction Monthly, RP Data Pty Ltd trading as CoreLogic has relied upon information supplied by a number of external sources. CoreLogic does not warrant its accuracy or completeness and to the full extent allowed by law excludes liability in contract, tort or otherwise, for any loss or damage sustained by subscribers, or by any other person or body corporate arising from or in connection with the supply or use of the whole or any part of the information in this publication through any cause whatsoever and limits any liability it may have to the amount paid to CoreLogic for the supply of such information