IPWEA CEO Robert Fuller says the model specifications will remove the uncertainty around street lighting procurement, which has resulted in impediments, inefficiencies and cost overruns from poorly drafted and often technically inconsistent specifications.

“These new specifications will be a ‘game changer’ for accelerating the rollout of LED lighting and smart controls across Australia and New Zealand, helping all parties successfully navigate the maze of new lighting technology,” Fuller explains.

LED and smart controlled public lighting technologies have advanced greatly in recent times and provide many features and advantages for improving amenity, safety, environmental and financial outcomes for communities.

IPWEA modelling shows that if every street light in Australia and New Zealand were converted to LEDs, councils would slash $120 million off their annual street lighting bills.

However, the features that provide these benefits also add complexity to the specification and procurement process, making the process difficult for all parties involved. 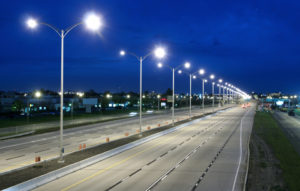 Currently, only 10 per cent of Australia and New Zealand’s street lights have been converted to LEDs.

“Early LED specifications often resulted in inefficient procurement processes that were costly for suppliers to respond to, raised the risks of inappropriate or poorly performing outcomes for buyers, and often resulted in less than fit-for-purpose outcomes,” Fuller says.

“Overall, this inefficient process has impeded the timely uptake of LEDs and controls for public lighting despite the many demonstrated advantages they provide.”

The Model Specifications provide an informative, structured template that is focused on the technical aspects for local governments, main road authorities and electricity distribution utilities, allowing them to prepare their own customised specifications within a structured public tender.

There has been exhaustive Australian and international input into the specifications to ensure they reflect industry best practice.

“The peer review of the specifications has been so overwhelming positive that we have already had requests to trial these on projects in Europe,” Fuller adds.

The Model Specifications are part of the Street Lighting and Smart Controls Programme (SLSC) which has been funded by the Australian Federal Government, Department of the Environment and Energy, to improve energy, environmental, economic and social outcomes.

The specifications – which have already been downloaded more than 1000 times since their release – can be downloaded from the SLSC website (www.slsc.org.au or www.slsc.org.nz) and are being supported by free industry webinars.