Wood Mackenzie’s Could renewables be the Majors’ next big thing?  report takes a closer look at the value proposition in wind and solar and the pace of the shift towards renewables out to 2035. 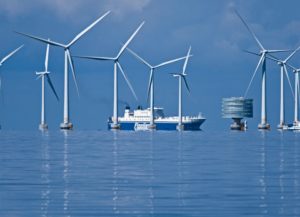 “We forecast average annual growth rates of 6 per cent for wind and 11 per cent for solar over the next 20 years.

“Renewables will satisfy only one per cent of the world’s energy needs in 2017, but will have captured a much bigger slice of the global energy market by the middle of the next decade, as oil and gas demand growth.”

Ellacott adds the value proposition is competitive versus some upstream investments.

Returns rank favourably with many of the Majors’ pre-sanction long-life developments, the most comparable upstream asset class.

The long-life nature of wind and solar projects and stable cash flow visibility could also provide much-needed support for dividends.

The European Majors are leading the way in shaping strategies to establish a presence in this fast-growing market.

Offshore wind may be the most attractive route to organic growth in the near term, offering scale and scalability on a par with upstream mega-projects.

Solar is more fragmented and competitive, but Total has used M&A to establish early mover advantage.

Wood Mackenzie expects capital to increasingly be diverted from upstream to build positions in wind and solar.

But wind and solar on their own are not going to transform growth prospects for the peer group as a whole.

“The scale of the opportunity is simply not there on our forecasts for solar and wind, at least not in the next 20 years,” says Ellacott.

“We estimate spend of US$350 billion on wind and solar out to 2035 is needed for the Majors to replicate the 12 per cent market share they hold in oil and gas.

But even this ‘bull’ scenario would lift renewables to just 6.5 per cent of the Majors’ production in 20 years’ time.”

Wind and solar are increasingly important strategic growth themes that the Majors cannot afford to ignore as they plan for 2035 and beyond.

Companies are only just starting to sow the seeds for the radical changes that lie ahead.

The company believes the Majors can bring their expertise in the energy value chain to build optionality and portfolio balance, which will help hedge against any future erosion of the upstream value proposition and the anticipated progressive hardening of investor sentiment towards carbon

Woods Mackenzie estimates growth rates between 1 and 1.5 per cent, focused on emerging markets in Asia Pacific, gas displacing coal as the second-largest fuel across all forecasts, except the IEA NP. Fuel demand growth is strongest during 2015-2025.

Gas growth will be around low-to-mid 3 per cent from 2015-2025; post 2025, growth moderates materially — between 1 and 1.5 per cent over 10 years due to slower economic growth and more efficient energy production, especially in the power sector.

Coal is static across all forecasts for Asia-Pacific, backed out by gas, nuclear and renewables.

Share. Twitter Facebook Google+ LinkedIn Email
Previous ArticleElectric car market sparking up as all vehicle sales rise
Next Article Major cyberattack a matter of when, not if