When Fulton Hogan was awarded a contract to remediate a steep unstable rock face overlooking the Port of Otago, it was faced with a number of challenges to deliver the project safely, within a tight budget, and in a highly visible location The project, known as the Flagstaff Hill Earthworks, was to stabilise a steep hazardous rock face next to the Port.

Also known as Observation Point, reclamation of areas of the port during the 1990s had resulted in an unstable rock face, with several slips, as well as rocks and boulders falling to the road below on an all-too-regular basis. 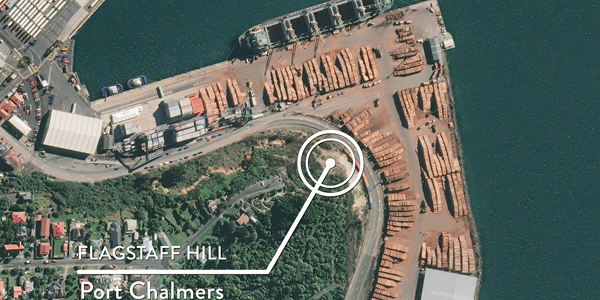 Consulting engineers WSP Opus were awarded a design contract to assess the underlying geology and develop a design for a cut slope with benches to remove the risk of further slips and rock falls in the area. The result of the design was the planned removal of 47,735m3 of material.

Fulton Hogan successfully tendered for the works, which commenced in the winter of 2019, completing the project in the four months to October 2019.

According to Grant Sime, Fulton Hogan’s senior project delivery manager in Dunedin, the contract scope was to work at height on an unstable rock face and strip off over 47,000m3 of clay and rock, and safely remove all the material from site.

“Before we would work out where and how to start the physical work, the entire site needed to be accurately surveyed,” says Grant.

“With existing gradients of 70% and greater, combined with the instability of the ground, putting people on the slope face would have been extremely dangerous.

“Using our own in-house surveying team, and external subcontractor Jared Reeves of Overview Surveying, we carried out a point cloud survey using a drone to understand what we were up against.”

The pre-start drone survey was mapped against the required finished batter of 35%, along with three, five-metre wide benches at the top of the slope, so that the exact quantities of material to be excavated were known. 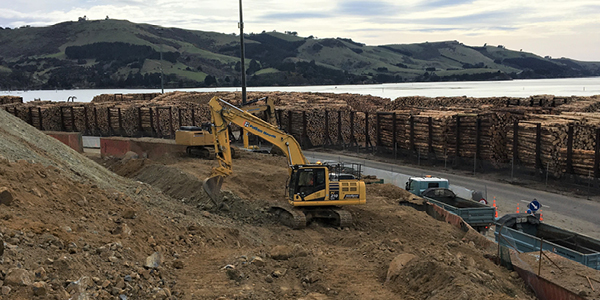 Given the safety and operational challenges of excavating on such a steep, unstable slope, Fulton Hogan sought input from excavator operators Ray Ta Huna and Kevin Patrick on how best to proceed.

Grant describes Ray and Kevin as two of the best operators in the region.

“It’s simple,” says Ray. “When you are loading out from a digger, you sit on top of the material and load out while your mound comes down gradually.”

Grant says this response gave Fulton Hogan the basis for how to proceed, knowing the company had full engagement of its expert operators.

“Together we developed a plan.”

With the drone survey having provided a highly accurate 3D overview of the existing site, and WSP Opus providing a 3D model of the required final design, making use of an excavator fitted with precision GPS-based machine control was the solution to this challenge. 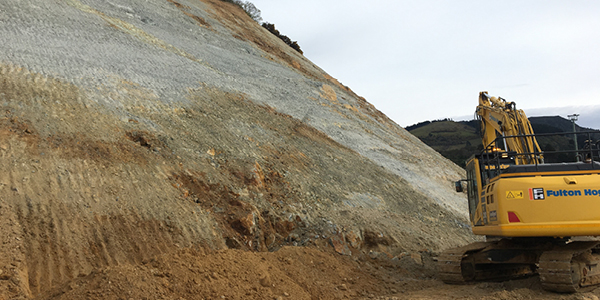 “With the Komatsu system, what really impressed me was the simplicity of the cab layout for the operator. In terms of the operator interface, it’s spot on. I think it offers by far the best operator layout,” says Grant.

“Having integrated Machine Control on this excavator was magic.

“Not having to set out pegs using manual survey methods improved efficiency tenfold. And because we didn’t have to have a surveyor on the ground, it was much safer.

“In that type of environment, we had no option but to start at the top and work down, and there was no going back.

“And the end result was without a doubt the best batter slope I ever been associated with,” he says. “It wasn’t just a simple slope either; it was benched at the top, then battered and curved around to follow the line of the point.”

The designs for the batter were provided to Fulton Hogan electronically, then downloaded to the iMC excavator, so at all times it was working to the client’s designs.

“In addition, the client accepted the as-builts coming out of the machine,” says Grant.

“Then, when we completed the 47,000 m3 material removal, we were between 80 to 100 m3 out, compared with the original design. It was so close, the client was just blown away. We are very proud of how close we got; in terms of that volume of material, it was nothing,” says Grant. 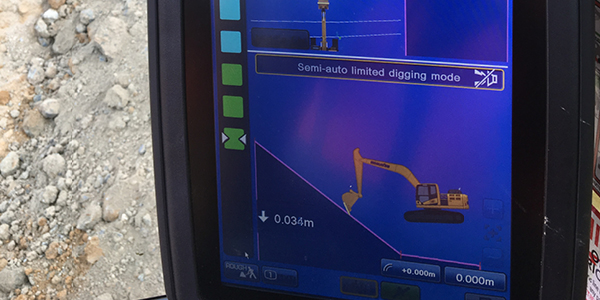 “I like the Topcon operating system, I always have, because you can put your drawing files straight into it, rather than having to use third party software. That’s one less step, and it’s easier than loading up terrain models,” he says.

“And because the sensors in the Komatsu machine are integrated, the excavator works really well, as you don’t need to worry about them getting knocked. I’ve seen how vulnerable they can be with the bolt-on systems.

Operator Ray Te Huna, who’s been an earthmoving equipment operator for nearly 20 years, with the last 10 years almost exclusively on excavators, says the Komatsu iMC excavator made his job “a hell of a lot easier”.

“It also takes a lot more people off the ground, so it’s much safer and easier not having to work around them,” he says.

“Certainly, it’s heaps faster. I’m probably 50-60% quicker doing my work, because I don’t need people to check it all the time. Now we just need the surveyors to come in and check the calibration a couple of times a week, if that.”

“I think I’d probably find it hard going back to a conventional machine after this.”