You are at:Home»All News»Water»How Bitcoin’s footprint is impacting water use
September 28, 2018 Water 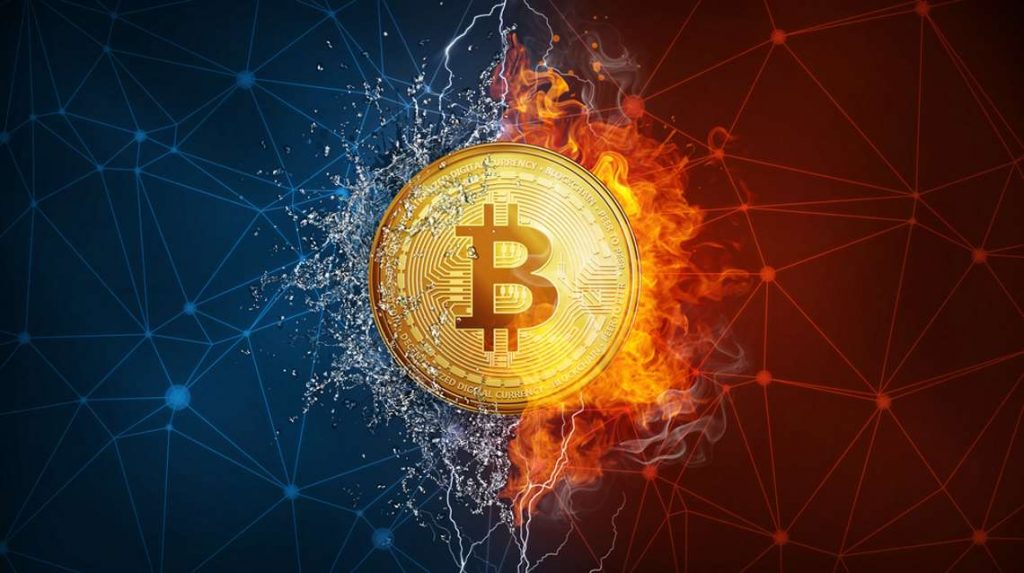 Miners had to degrade or devour cubic metres of water to produce each gram, a virtual or ‘embedded’ amount known as each precious metal’s water footprint.

Yet today’s world is rushing to extract an unprecedented new source of wealth: blockchain-enabled cyber-currencies.

And as millions of ‘data miners’ rush after each twitch of bitcoin prices, currently priced at US $8,100, few know, or likely care, how much water it takes to generate each invisible unit.

To be sure, that footprint varies by location and energy source.

Yet based on current trends, and documented water requirements to generate electricity, a back-of-an-envelope calculation suggests bitcoin mining drives both a prodigious and fast-escalating demand for water.

Start by recognising that a single transaction burns as much electricity as a household consumes in a week.

Recent surges have involved 2.1 million global transactions – round the clock over seven days – in aggregate consuming 32 terawatt-hours per week. Many took place in China, Europe and North America where cooling of thermal installations needs 20 to 60 gallons of water per kilowatt-hour.

In 2010 (the most recent estimate), relatively clean and efficient US power plants withdrew 40% of all freshwater in the US, a portion amounting to 161 billion gallons a day.

Since then, demand has grown nearly 30% a month.

As this magazine goes to press, bitcoin’s thirst has already more than doubled to more than three billion cubic metres.

That may still seem manageable, except there’s no sign this demand, driven by cryptocurrency fever, will fall off.

To the contrary, hunger for more and more computing power appears to be accelerating, chasing more and more electricity, a rush which corresponds to an exponential demand for the water embedded within.

In a rapidly up-sweeping demand chart, Power Compare shows that, while bitcoin mining is now ‘only’ consuming 0.13% of global electricity output, the Bitcoin Energy Consumption Index estimates consumption has increased by 29.98% in March 2018 alone.

It’s tempting to laugh off such apocalyptic forecasts.

Yet even if fears are exaggerated (demand triggers political and economic responses), cyber-currency’s water footprint raises legitimate questions of size, impact and equity: How big is it? Where does it fall? Who pays? Will it stop?

The dirty little secret is that ‘frictionless’ bitcoin is anchored to heavy physical infrastructure.

Second by second, thousands of so-called miners work out puzzles in a data-intensive trial and error every ten minutes adding a new set of transactions (blocks) to bitcoin’s blockchain.

Each uptick in this computational arms race requires massive support by data servers and storage.

Tracking down and quantifying bitcoin’s physical footprint is – much like the currency itself – volatile, speculative and, well, cryptic.

Guy Lane, founder of sustainability advisory service Sea O2, has described the challenge of “nailing down” the nexus of a dynamic, off-books phenomenon.

“Bitcoin is mined everywhere from data centres, distributed locations, working pools, rigs set up in garages and even on PCs that have been hijacked by bots.”

If location introduces one variable, the equation is further complicated by fuel type.

“Depending on where miners are located,” explains IWA officer Emma Weisbord, “energy is provided from different sources – coal, wind, solar, hydro – that each have different associated water footprints.”

Water footprint champion Arjen Hoekstra agrees, but suggests that – with a few steps – water professionals can make more precise estimates by looking at breakdown, and multiplying each type of electricity use with the WF intensity.

Without that, sceptics may dismiss all such impacts as overblown.

Crypto- enthusiasts like Coindesk claim the entire bitcoin network uses slightly more power than it takes to run the US Treasury for a year.

Weisbord concedes the need for perspective, and recalls past fears of Netflix and streaming services burning up energy.

Yet “the energy footprint of cryptocurrency cannot be ignored,” she says.

“In some cases, bitcoin mining is being used to justify existing energy production projects that are being protested.”

She points to a contentious Eastern Canada project that has used the potential sale of electricity to bitcoin miners as justification to finalise permits.

You can’t manage what you don’t measure.

So how can cities prepare for, adapt to, or mitigate the thirsty impact of virtual currency on our real and dwindling water supplies?

In the absence of good data, some compare bitcoin with real coins.

Julien Roberge, head of sustainability innovation at D3Dura in Vancouver, notes how “the accepted and established impacts of our current financial and other systems that these blockchain-based technologies aim to replace also have to be accounted for when evaluating the long-term viability of cryptos.”

So if cryptocurrency replaced traditional currency, would the world use less water and energy, or more?

In terms of online transactions, it’s not even close.

According to Spectrum, half a million Visa or MasterCard credit card payments burn less than one bitcoin transaction.

The flip side of the coin suggests a comparable environmental disaster.

The ore extraction alone is costly, in terms of carbon dioxide emissions, water use, pollutants, and power consumption.

All that adds up, too.

A 2009 analysis found that Western copper mines use 35.7 gigajoules of energy per ton.

Bitcoin miners are often less visible or direct in their impact. In seeking cheap electricity, miners often gravitate around hydropower.

Just as climate change asks us to bend down the energy demand curve, bitcoin miners are sucking up city-size supplies of electricity and the water lost in providing it.

Given those finite resources, cryptocurrencies take water and energy from other families and firms.

In China, where a Cambridge University study found 58% of bitcoin is mined, that further exacerbates access in the water-stressed nation.

Data centres may be working to become more water-efficient, but the total volume of water they consume remains huge, explained Chinese data engineer Li Yong, in a Yale University report.

“In water-scarce cities like Beijing and Shanghai, we can’t always get the water we need.

“It’s really about securing our supply amid water shortage.

“Facing constrained supplies, to keep up with cyber currency’s thirst, some seek efficiency.

Several efforts are underway to reform how the bitcoin network processes transactions and there are systems being tested that do not require the same level of energy consumption as bitcoin.

Yet as with second-generation biofuels, these improved solutions are still some time away.

Besides, efficiency brings its own problems and paradoxes.

As with other technological advances like irrigation in agriculture and outdoor LED lighting, more efficient systems for mining bitcoin could, by lowering the price of water and energy, simply attract even more and thirstier new miners.

It’s the definition of a vicious cycle.

In some ways, it’s simply a more intense and less visible version of “externalities” we’ve seen in other water-intensive extractive industries.

To slow or reverse such demand may require unlocking water’s scarcity price.

A higher economic exchange value of water would work its way up through power generation to reveal, and reflect, the true environmental costs of cyber-currencies.

“We are heading into a future in which the two [financial system]paradigms might not coexist because the efficiency of one will likely make the other obsolete,” says Roberge.

This article first appeared in The Source, the magazine of the International Water Association