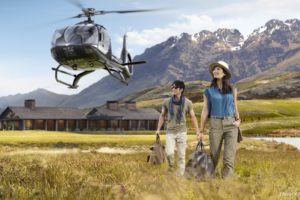 Local Government New Zealand says the funding is “a step in the right direction”, but the Green Party believes it “falls short of what’s needed to cope with skyrocketing tourist numbers”.

The Tourism Infrastructure Fund will provide $100 million over the next four years in partnership with local councils and other community organisations, for projects like new carparks, toilets and freedom camping facilities.

The fund is about helping communities respond to demand and addressing capacity constraints, while also facilitating future growth newer tourism regions as well as the main tourist hubs, Bennett says.

“Government is funding tourism in a number of different ways,” she explains.

“That’s why the Tourism Infrastructure Fund has been announced alongside a $76 million funding increase for DOC to upgrade and develop tourist facilities on conservation land and to expand the great walks network.”

The Tourism Infrastructure Fund will provide infrastructure such as toilets and carparks, but the government is also “prepared to consider” projects like visitor information centres, and feasibility studies for infrastructure projects on a case-by-case basis as part of the fund.

“We’re moving from a focus of just boosting tourist numbers to also attracting higher-value tourists to all regions,” Bennet adds.

“This funding will ensure we have the capacity to do that.”

Successful projects will demonstrate value for money and be co-funded by applicants, who will need to show that other funding options have been fully exhausted.

“Government is stepping in to help ensure we have the right infrastructure to support this important industry, especially in areas with high visitor numbers but small ratepayer bases,” Bennett believes.

“However, local government still has the lead role to play in building and maintaining that infrastructure,” she adds.

“The private sector is also playing its part by investing in new and expanded commercial attractions and hotels.”

Government will continue to work with councils and the industry to consider larger tourism projects which will be funded outside of the Tourism Infrastructure Fund.

“We’ve done this in the past with the Hundertwasser Art Centre in Northland and we’re open to considering other opportunities.

Last year international tourism expenditure reached $14.5 billion, which is more than 20 per cent of New Zealand’s total exports of goods and services.

The fund is made up of $60.5 million in new money from Budget 2017 and $41.5 million in funds which have been reprioritised from the Tourism Growth Partnership and the Regional Mid-sized Tourism Facilities Grant Fund, with $2 million provided over four years to manage the fund.

LGNZ President Lawrence Yule says the rapid growth in tourism of the last few years has put pressure on mixed-use infrastructure or highlighted the need for new infrastructure, especially in communities with a small ratepayer base and high visitor numbers.

“We need to ensure the visitor experience remains an excellent one, and that communities are not disproportionately burdened with the cost of building, operating and maintaining the infrastructure needed to deal with huge influxes of people,” he insists.

“What started out as a $12-million-dollar fund last year is now $102 million, so we are now on the right track towards addressing the issues caused by rising tourism numbers.”

The scale of the tourism infrastructure need has been highlighted through several recent research reports.

Work by Tourism Industry Aotearoa and supported by LGNZ identified a potential pipeline of 680 local and mixed-use projects, of which 501 were costed at $1.38 billion.

A report commissioned by the chief executives of Air New Zealand, Auckland Airport, Christchurch Airport and Tourism Holdings Limited called for the creation of a National Tourism Infrastructure Levy which between the industry and matching government contributions would generate $130 million a year to fund local tourism infrastructure needs.

There are many benefits associated with the tourism industry’s continued growth, Yule says.

“However, given the scale of the current issue and the growth forecasts we see the need for ongoing work in this area.

“We look forward to working with central government to build an accurate picture of the need.

“LGNZ will continue to advocate for a sustainable, long-term funding mechanism,” Yule promises.

The Green Party also believes more needs to be done, claiming the bump in DOC funding for tourist facilities will “do nothing” to halt the loss of threatened species.

“In total, it’s less than a quarter of the $100-$150 million the tourism industry says is needed every year.

“Tourism will become a “poisoned chalice” for the country if the government doesn’t make up for its massive underinvestment in basic infrastructure like wastewater, sewage and public toilets.”

He says it’s “bizarre” that National remains allergic to putting in place a tourism border levy.

“It makes sense that tourists help pay for the facilities they use, and it would be a sustainable, ongoing funding source that increases as tourist numbers do.

“The extra funding for DOC for tourist facilities is welcome, but it does not address the serious funding shortfall for the most critically important areas of DOC’s core work – conservation and the protection of threatened species like kiwi, kea and tuatara.

Shaw claims DOC’s funding has been chopped by some $336 million since National came to power so DOC remains “woefully underfunded”.