The recent cyclone episodes and the associated flood events around New Zealand provide yet another reminder that the nation is extremely vulnerable to floods, experts advise 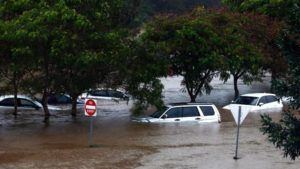 “Once again, the recent flood events have demonstrated that they can have very adverse effects on communities causing damages, and trauma as well as disrupting daily lives,” says University of Auckland Department of Civil and Environmental Engineering Associate Professor Asaad Shamseldin.

“They are also a reminder about what can happen as a result of climate change in which extreme flood events may become the norm.”

“This planning with communities can be reflected in the options and their implementation through adaptive pathways so that flexibility is built in for adjustments over time,” she explains.

In particular, such considerations are essential for decisions taken today for intensification and new developments, services and infrastructure that will last for long timeframes and have to respond to changing climate conditions.

“By doing this the burden on emergency response and our communities will be lessened. A good example of such planning is currently underway by the three Hawkes Bay councils with community panels.”

“Importantly, NZ communities face not only natural hazards, like earthquakes, we also face slow onset change due to climate and wider environmental change,” Glavovic notes. “The latter can and will compound extreme events, e.g., flooding – or the opposite, droughts – may be exacerbated in some parts of the country.

He warns that New Zealand is facing rising sea levels – “and this is not a debate but a reality” – that these environmental changes are superimposed on societal changes, demographically, economically and culturally.

“We need a robust community planning and decision-making system to enable communities to deal with this reality,” Glavovic insists. “Our current statutory framework for planning has many strengths but it is not designed for the challenges of the 21st century.”

The current planning system requires local authorities to identify natural hazards and to mitigate (reduce) potential impacts (not necessarily avoid the hazard). “There is no requirement to avoid putting people in harm’s way; just that we mitigate the impacts.”

Thus the burden falls on local authorities – often without the capacity and resources to adopt proactive, strategic approaches to avoid exposure to harm or the wherewithal to reduce the risk facing communities already living in harm’s way (due to legacy development).

Natural hazards are only one of many issues that need to be considered in deciding on new development, he maintains. “We also have to consider factors like relationship to existing development and the cost of connecting infrastructure, roading, etc.”

Natural hazard risk is not always a priority. “Despite scientific knowledge about flood and other natural hazard risk, there is in-built pressure to discount this risk and to approve development – because this is seen to meet needs in places under development pressure and even areas not under pressure such as building on liquefaction-prone soils; on low-lying coastal areas, etc.”

He believes the critical question for the future is how to connect the formal and informal institutional arrangements that together shape community decision-making. “Most importantly, we need to open up, not close down the opportunity for community conversations about natural hazard risk and deeper concerns about resilience and sustainability.”

For instance, what is the best future course of action for the many communities around New Zealand that have experienced repeat flood events in recent decades?

“Many people living in at-risk locations have deep spiritual, cultural and personal ties to the places they live,” Glavovic notes.

“But if there is a real prospect of loss of life and the things we hold dear, at what point do we need to consider relocation or managed retreat? How do we have such difficult conversations?”

The elephant in the room is what New Zealand communities face in a changing climate: with more than 95 per cent of the population living within 10km of the seashore, how are we going to deal with rising sea levels?

“Sea level rise is a certainty – what is uncertain is quite how fast it is going to rise and what the locality specific impacts are going to be in the distant future,” he admits.

“But we cannot afford to postpone community discussions about what this means for New Zealand.

“There is an urgent need for leadership – from government, civil society, the private sector, science and the media to address this question: to open up the difficult conversations that are necessary to build resilience in the face of waves of adversity.

“This is an issue of much deeper importance than the urgent problem of Auckland housing that dominates contemporary political debate.

“We need to create safe spaces for communities to have difficult conversations about how to future proof our communities.

“Only then will we be able to weather storms like those hitting the country now; and prepare for a future characterised by complexity, uncertainty, change and contestation.”