Food left out to fester is a known target for flies, bugs and creepy crawlies, but their insatiable appetite for waste food is actually now being harnessed as a solution for the greater good 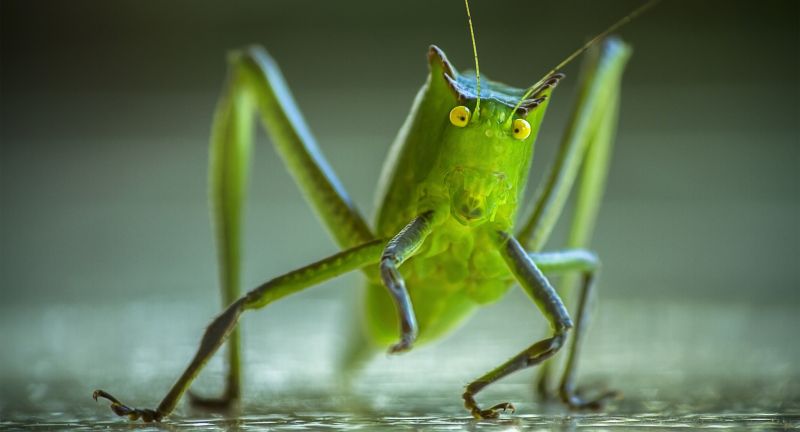 The idea of eating bugs might be the stuff of nightmares for the squeamish with sensitive palates, but it’s becoming a big business. Edible crickets, grubs and bugs are now being seen as an alternative protein source for those wishing to cut down on meat for environmental and personal health issues.

Bugs, it seems, are about to boom. Estimates suggest that the market will be worth more than $62 million in North America by 2024 – a 43% rise from today. And for good reason too. Insects, perhaps not known for their mighty protein punch, can contain a higher protein content – 30-80% on a dry matter basis – than traditional sources.

Furthermore, according to the UN Food and Agriculture Organization, insect farming produces one hundredth of the emissions of pig or beef cattle equivalent. It was at the end of last year that edible insects made the headlines in the UK. Sainsbury’s announced it would be the first supermarket to stock edible bugs by launching Eat Grub’s Smoky BBQ Crunchy Roasted Crickets in 250 of its stores across the UK.

“Insect snacks should no longer be seen as a gimmick or something for a dare,” said Rachel Eyre, head of future brands at Sainsbury’s at the time.

Yet, as well as being touted as a substitute for beef and pork, bugs are being harnessed for more than just an alternative protein source. But now the appetite of the insects themselves is being used in a process that could have a big impact on the 1.3 billion tonnes of food wasted globally, while helping to feed a global population expected to reach nine billion by 2050.

Insect Bioconversion
Called insect bioconversion, the process involves feeding insect larvae with organic residue – for example, this could be materials of vegetable origin from food processing or agricultural production. When the grubs have been fattened up and reached a “critical mass”, they can be harvested to create multiple, valuable end products.

One product being produced is protein for inclusion in animal feed. Traditionally, protein-rich animal feed is made from soy and lso fishmeal, both raw materials that place a considerable strain on the environment. It also comes with a carbon footprint.

Furthermore, as well as active soil conditioners, the harvested grubs can also be converted into ingredients for biodiesel, or wellbeing products. If that wasn’t enough, these seemingly jack-of-all-trade critters also possess a skin that contains chitin, a material with many uses including the potential for processing into a flexible, plastic packaging material.

To articulate this further: bugs have the potential to eat a long list of permitted by-products and convert man’s wastes into a whole shopping list of useful products.

Blue Chip Interest
While it’s important to point out that many of these applications are still in their early stages, companies around the world are pre-empting what could be a big insect-bioconversion market.

An arms race for commercialising and scaling up these techniques and processes is underway, according to Damian Malins, Venturing Projects Director at Fera Science Ltd, formerly the Food and Environment Research Agency (Fera) which is now part owned by DEFRA and Capita.

“There was a lot of concern that this was a bubble that had burst,” he says, speaking to WMW magazine. “Actually, over the course of the last twelve months, we have seen an increasing number of blue chip clients, partners and prospects from a number of sectors, whether it’s companies looking at waste reduction, companies looking at alternative sources of animal feed, companies looking at how they diversify their business into producing plastic products or develop new products from insect derived materials.”

He adds: “The market has been dominated by a lot of entrepreneurial companies, some of which have raised a significant amount of investment.”

Expanding Production Capacity
One such company is Netherlands-based Protix, which secured €45 million from private investor Rabobank to expand its insect production capability for the animal feed industry.

In the meantime, the UK is lagging behind a little, but does have earlier stage innovator companies offering expertise into the sector via start-ups like Entomics, Entocycle, Beta Bugs and Multibox in addition to the sector lead position which Fera is taking.

Dr Maureen Wakefield is a senior applied entomologist. With a 33-year career working to understand insect biology and behaviour, she is well placed to talk all things bugs. She’s keen to point out the different markets at play here.

“Insects for food is a very different market to insects as feed, is a very different market to insects for waste reduction,” she says. “I think there have’s been some significant developments in all three areas recently, and particularly in the animal feed, on the back of the legislative change in 2017 that permitted the use of insect protein in agriculture feeds in the EU.

“So there’s definitely been more development by companies to at insect protein for animal feed. There’s also movement, obviously, in insects as food in the EU and the Novel Food Regulation ((EU) 2015/2283). There are several products that are currently going through the authorisation process for that.”

So which bugs are best when it comes to converted food waste?

Navigating Regulations
It’s important to point out that for animal feed production, the food waste used for insect bioconversion is strictly governed by European law, led by the European Food Safety Authority (EFSA), and follows the fall-out from the BSE crisis from in the 1980s.

“Currently, we’re really primarily looking at production of feeds for monogastric animals and for fish, for aquaculture,” adds Wakefield. “We’re not looking to feed the insects to ruminants. Pretty much, it’s plant-based materials, and it’s materials that are approved for feed use anyway and that actually appear in the feed catalogues that are permitted for use for substrates for insects. So slaughterhouse waste, anything like that is not permitted as a feed source, currently.”

In a nutshell, the food you can feed to the bugs has to be what could have gone into animal feed anyway: cereal-based products, fruit and vegetables. Meat-based products cannot be used.

However, for the aqua-feed market – essentially fish food – there has been some regulatory movement. After insect protein was legalised as aqua-feed in the EU in 2017, the market has consumed 500 tonnes of European-produced insect meal. This is expected to rise.

The Bug Business Model
Food waste treatment in countries with mature waste management infrastructure is largely understood: food waste is collected from households or businesses, and then transported for treatment at anaerobic digestion (AD) treatment plants or by other means.

Insect bioconversion is no doubt a promising solution not only to the global food waste challenge, but also to the increasingly widening protein gap emerging around the world, predominantly in meeting animal feed demands. However, it also raises the question of what the business model looks like.

Dr Wakefield believes there would be a range of options.

“The waste treatment company has a facility on site where people effectively carry on just providing them with their materials for them to process it,” she says.

“That waste treatment company would either have a hatchery or a breeding facility to maintain their own colony, or they’d be buying in the eggs to act as a resource they add in to their mix for them to solely focus on the recycling and waste reduction activity. They don’t need to be necessarily the expert breeders. That means they can buy their eggs from a whole range of suppliers.”

Meanwhile Malins believes there will be a hybrid of approaches.

“Insect bioconversion is likely to augments AD is part of a much wider, integrated circular economy and waste valorisation ‘solution’. There are those companies who are looking at acting as a technology provider, selling the whole system to a company who wants to manage the end-to-end process on their site and own not only the eggs, but also the end products and the end process,” he adds. “And there are those companies who are starting to develop a business model around they provide the eggs, they lease the rearing facility, and then they take back the end product to be processed at their central site.”

UK Rollout Plan
While smoky BBQ crunchy roasted crickets may not be to everyone’s taste, efforts are underway to see how bugs, namely flies, can be grown and harvested in a variety of ways. And if that can help keep everyone fed while reducing our waste, that can’t be a bad thing. It’s certainly bug food for thought.