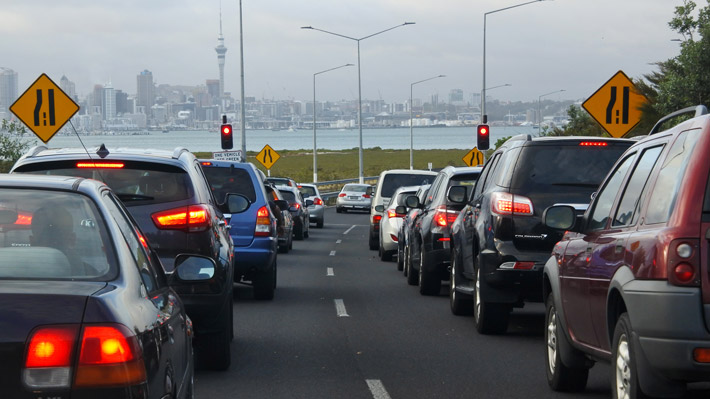 “All the goods and services the expanding population uses are provided by the road freight transport industry, which is keeping pace with the growing demand.

“What has fallen behind is the infrastructure to get all those daily and weekly requirements to the supermarkets, shopping malls, building sites and factories.”

Failure to keep up with infrastructure demand ensures congestion will worsen, Aitken precicts.

“Auckland, like every other world city, is growing and failure to meet the demands, whether they be for freight or people, will condemn us to a congested future, and we are already years behind.

“Decongesting our existing roads is a priority to prevent the city from grinding to a halt because of the on-going growth.

“The major projects planned and committed for the future will help, but we must make better use of the existing roads now.”

Road freight transport is embedded in the economy, Aitken notes.

“Nobody can function without it.

“Trucks deliver the food and clothing and everything else we buy at a supermarket or shopping mall.

“Some of it will have arrived in Auckland on a ship or by rail, but to get to its final destination it needs a truck.”

The most recent statistics gathered by National Road Carriers show that every week a medium to large-sized supermarket receives 100 pallets of toilet paper, 100 pallets of nappies, 100 pallets of drinks and hundreds of other pallets of fast moving consumer goods – all delivered by truck.

The Auckland metropolitan area sees over one million litres of milk a day on the move – by truck.

With the current building and civil engineering infrastructure boom 75,000 tonnes of aggregates are being transported around the city every day – by truck.

All these businesses operate by the Just in Time business model, Aitken explains.

“Goods are delivered daily, because they don’t have the huge warehouse space to store everything if deliveries were only made once a week.”

On an annual basis, there are 182 million tonnes of freight on Auckland’s roads, 1.3 million containers moving between the Port and the inland Metroport at Te Papa and out of the region.

The boom in the motor industry has result in 225,000 vehicles a year being trucked away from the wharves and delivered all around the North Island.

“Yes, the opening of the twin tunnels joining Highway 20 to Highway 16 has helped, as will the widening of the existing motorways,” Aitken concedes.

The Sylvia Park to Onehunga East – West link will take several thousand trucks a day off the urban streets of Onehunga, Te Papa and Penrose and deliver them direct to the inland Metroport.

The Penlink project to the Whangapararoa Peninsula will take pressure off Silverdale.

But these projects are in the future, Aitken observes.

“National Road Carriers would like to see Auckland Transport freeing up existing roads and giving more priority to working vehicles.

“Trucks moving about the city are less productive than they were five or 10 years ago.

“Sometimes by up to 50 per cent if a truck can only complete two round trips a day instead of three.

“That results in higher transport costs being added to the final cost of any item you or anybody else might buy.

“Getting trucks moving more freely means keeping costs under control for everybody, whether you are buying toothpaste or timber; cauliflower or concrete.”

“Auckland Transport needs to make greater efforts to encourage the use of public transport with better park and ride facilities for both bus and rail users.

“Allow more priority vehicles into bus lanes or create lanes to be shared by trucks and buses.

The Northern Busway alongside the northern motorway is the most under-utilised piece of road in Auckland, even during rush hour, Aitken says.

“Creating extra lanes of traffic on existing roads is not difficult.

“All the major arterial roads should have no parking 24/7.

“Get rid of the parked cars – just one parked vehicle can make a lane unusable and create a bottleneck – and you create another lane for traffic to flow along.”

“With our expanding population, there are going to be more vehicles of all types on the road, whether we like it or not, even if the upward trend of the increased use of public transport continues.

“Those extra vehicles have to go somewhere.

“Let’s create the extra space on our existing roads to accommodate them while keeping the traffic moving better than it is now.

“And that will get all the business vehicles, trucks and vans, going about their business in a more economical way, to everybody’s benefit.”