As China faces rapidly mounting volumes of waste, it intends to have digitally monitored intelligent waste collection sites bring about an increase in the currently low recycling rate 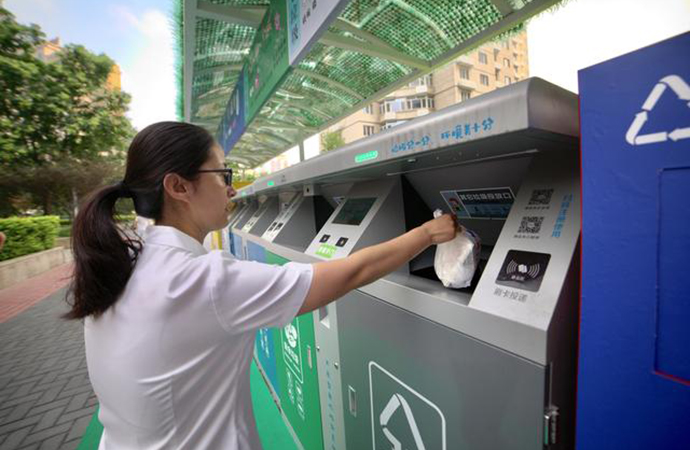 For a good 20 years, China has tried to increase its recycling rate, with only modest success so far. The more developed a country becomes and the greater prosperity it feels in even remote regions, the more urgent become its recycling problems.

At present, China is already producing more waste than the United States, a nation known for its consumerism. By 2030, the World Economic Forum estimates that China will have double the household waste volume of America.

In order to turn things around, China is putting in place advanced measures to increase its rate of recycling.

From then on, anyone who failed to neatly separate kitchen waste, dry waste, recyclable waste and hazardous waste faced fines: up to 200 yuan (about $40NZ) for private individuals and up to 50,000 yuan (over $10,000NZ) for businesses.

As with many other offences, the fine triggers the entry of negative points for individual citizens on their social credit rating account. Anyone who chalks up too many negative points is deemed less creditworthy at Chinese banks, for example.

At the same time, the introduction of the new waste collection system was accompanied by a massive information campaign, not just in schools and the media but also locally at the waste collection sites, where volunteers educated the public.

By 2025, China wants to have introduced waste separation in all prefecture-level cities, of which there are currently 299. However, in smaller cities, let alone in rural areas, the recycling era has not yet begun at all.

“In rural areas, the population density is low, the per capita waste production amount is small, and the cost of waste collection is high.”

However, collection is going anything but smoothly in the cities too. Besides further expanding the existing collection infrastructure, China also wants to use the advantages of digitisation to increase the willingness to engage in waste collection and improve the discipline of doing so. Initial pilot projects are already underway.

After registering by mobile phone, each household receives an account where bonus points are awarded for materials that have been correctly disposed of. The points can later be exchanged for everyday goods or cash. In other words, the system is reward-based and not punishment-based, at least right now.

The waste collection sites are monitored in real time, with sensors and video cameras able to track with precision who disposed of which waste and when. Access to the collection site is enabled by means of facial recognition, an identity document or the scanning of a QR code.

At the heart of the system is an intelligent recycling box with openings to insert glass, metal, plastic and paper as well as four built-in 240-litre plastic waste containers. The IT modules integrated in them carry out facial recognition and automatic weighing, and a level indicator signals when a container needs replacing.

Introduced in 2018, the system enjoys great popularity according to official information. The participation rate is 100% and the waste disposal accuracy is now at 70%.

Several similar systems are being tested in other places in China, but the Chinese are still far from a full-coverage introduction, even in a single city or part of a city.

“Because of the relatively high investment cost of the system, no city has fully adopted it yet. In the future, cities may try to promote the application of this model combined with a garbage charging system.”

The intelligent waste collection system as it is currently being tested in Changsha and elsewhere can subsequently be expanded as part of a more far-reaching digitalised waste management system.

For instance, Guang Zeng points out that the data collected in the digital collection islands could be advantageous for the planning of urban waste management.

“Intelligent recycling systems can monitor residents’ participation in waste recycling in real time and make available the results from big data analysis, which can be used for evaluation and then for the formulation of corresponding promotion and implementation policies.”

Intelligent waste collection sites do in fact offer very thorough control capabilities. For example, data about the quantity and location of waste can be obtained by installing RFID chips on the waste containers and RFID chip card readers on the refuse collection vehicles. Any changes or optimisations can then be made based on data, not on subjective feelings.

The picture is similar for planning the most efficient possible routes for refuse collection vehicles. And important knowledge can also be gleaned from the data provided by intelligent waste collection and recycling systems in order to use waste collection charges to control waste streams.