New Zealand may be committed to major infrastructure projects such as Auckland’s light rail but Australia’s public infrastructure investment is set to peak, a leading think tank predicts 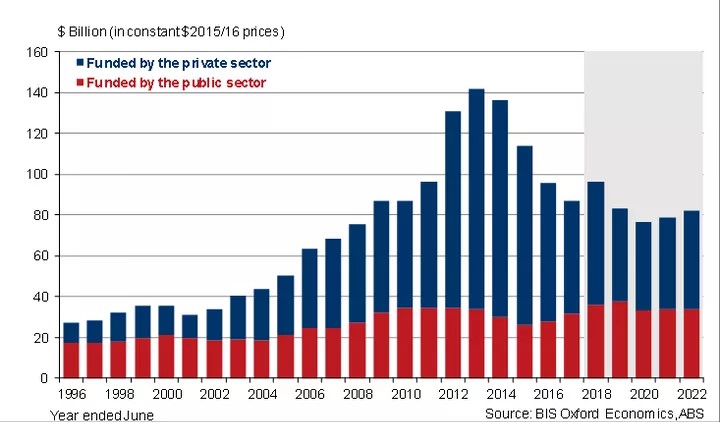 The Australian economy will require new drivers to support employment and wages growth into the future, says BIS Oxford Economics in a recent article in The Urban Developer.

Total measured work in Australia’s largest building and construction sub-sector is estimated to rise 10% to $96 billion in 2017-18 – thanks to both rising public infrastructure investment and a renewed burst of LNG activity, according to BIS’ Engineering Construction in Australia 2018-2032 report.

The recent federal budget announcement will see an extra $24.5 billion worth of transport improvements as part of the government’s $75 billion ten-year infrastructure plan, focused on tax relief, business investment and of course, big infrastructure commitments.

“Driven by a range of new projects across transport as well as the rollout of the NBN, higher public infrastructure investment has helped offset the drag from the bust in resources investment – and has been a key driver of growth and employment in the national economy.

“The problem is we are fast approaching the crest of the public investment ‘wave’ – meaning the Australian economy will require new drivers to support growth in employment and incomes into the future.”

“An $18 billion crunch in measured oil and gas construction is the main reason behind the fall in activity in 2018/19 – and most of this represents imported LNG modules with little impact on the local construction industry,” Hart notes.

New South Wales is expected to outshine Western Australia as the nation’s largest engineering construction market in 2018/19, a title it last held in 2004/05.

“While NSW and Victoria will continue to perform well, activity is picking up in Queensland and South Australia – the question is whether it can be sustained,” Hart says.

It’s a grim forecast for WA. Much of the decline from 2018/19 is due to the completion of import-intensive LNG projects.

“Excluding oil and gas construction, engineering construction activity in Western Australia is forecast to rise from around $9.7 billion in 2017/18 to between $11-12 billion per annum over the subsequent four years, supported by the recent additional Federal Government infrastructure funding and a mild recovery in mining investment.”