After four years of uncertainty and $35 million of planning, rapid transit between Auckland CBD and the airport has finally been narrowed down to three options – Greater Auckland investigates 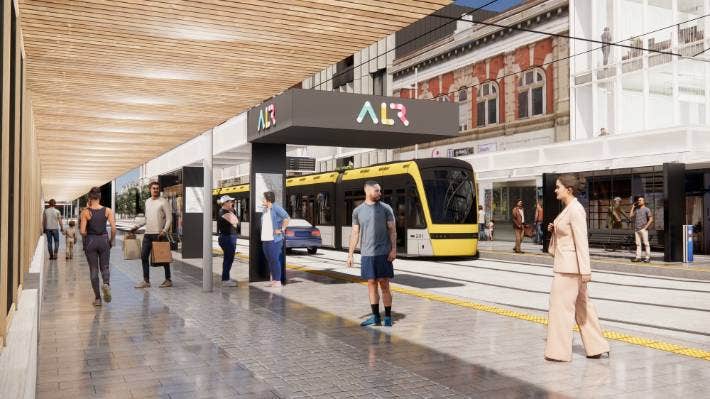 The government has released the recommendations from the Auckland Light Rail team (ALR), ahead of this being considered by Cabinet later this year. This appears to be a case of trying to gauge public reaction so they don’t end up with a repeat of the Northern Pathway – and that’s understandable given the cost of the options now range from $9 billion to $16.3 billion.

However, they haven’t released all the information, just a summary of it; and won’t release the full indicative business case which will allow us to properly see their assumptions until after the government decision is made.

Unfortunately, I feel that the government have once again been let down by officials who, as I have long feared would happen, appear to have leant heavily on the scales to justify a much more expensive solution.

ALR say that from their engagement, 66% of people support light rail, with the strongest support being in South Auckland where the result in some communities as high as 82% – while the most concern or opposition to the project came from North and East Auckland, and some of that was because they want more investment in their communities first.

Currently there are 60,000 households and 169,000 jobs in the light City Centre to Mangere corridor. They say that, depending on the option chosen and the scale of urban development that occurs driven by other ‘urban interventions’, by 2051 there could be as many as 66,000 additional households, housing 156,000 people, and another 97,000 jobs. That’s like adding a whole Hamilton to the corridor.

They also provide this diagram (below) to indicate the different levels of development enabled by different transport options.

But this is an overly simplistic take. There are many factors which drive housing typology, such as what you can access on the entire transport network, including on other PT routes connected to this corridor (and other modes), the levels of service offered (e.g. how frequently they run), and how that changes over the entire span of the day.

We’re also seeing already seeing those higher density forms on bus routes, such as along Gt North Rd and in the city centre.

The issue on the proposed light rail corridor has not been a lack of places to intensify, but zoning that doesn’t allow it. And, given what we’re already seen from the council so far in response to the NPS-UD, it seems we’ll be lucky to get zoning that will enable the light rail scale density shown in the graphic, let alone the metro or metro-plus scale ones.

As I’ve mentioned previously, the ALR team have come up with three options, and now we have a little more detail about them. The options are:

One consideration was that Light Rail on Sandringham Road it would make it necessary to relocate a significant power cable to Dominion Road. This would delay works by up to two years and would mean that businesses and residents on both Dominion Road and Sandringham Road would be affected by construction disruption

Notably there are no station locations on the map above, which fudges what the actual impact of these options will be. But they must have some in mind, as they have provided the number of stations there will be for each option – along with some of the other outcomes of their assessments.

The two tunnelled options are forecast to perform better, but the modelling behind it is dubious at best. A lot of is because those two options are described as faster – but there’s a catch, and the information above allows us to break down travel times for each section to get a better understanding.

A couple of things stand out in this.

Even if you accept the modelling results at face value, the extra 40-90k jobs are only going to be an extra few minutes away. A lot of people would still choose to travel by light rail in that scenario. It’s hard to believe that an extra few minutes will take out up to half of the demand.

The table above also suggests there will be enough capacity on all options for 50 years or more. If we do start having capacity issues, we can always build more lines then. We shouldn’t be thinking of this project as having to solve every problem.

The costs are where things really get out of whack, and are likely to be the focus of attention for media commentators.

But I have to wonder why the light rail costs are so high, coming in at an average of about $375 million per km. Most overseas projects come in between NZ$60-150 million per km, and even Sydney’s light rail – in which costs ballooned due to poor project management – came in at about NZ$290 million per km. Are they planning on using solid gold tracks?

I suspect the clue to this cost comes from the table showing they need to buy 489 properties along the route. That suggests they want to widen much of the Dominion Rd corridor – which is not needed, and wasn’t part of previous proposals. The government should really be asking for an independent peer review of these costs.

There is additional need to clarify these costs as the minister also suggested Auckland may have to pay for some of the project, which is something that hasn’t been on the table before. Rapid Transit should be treated the same as motorways and fully funded by the government. They are also considering value capture options, i.e. property owners who benefit from the project could be asked to contribute. (Ed: Talking to RNZ this morning the Minister suggested this could bring in $2-3bn towards the project).

I also worry what will happen to these costs as the project progresses. Could we end up with a $30 billion tunnel option?

As for the benefits, they all apparently have about the same benefit-cost ratio.

I wonder what the BCR of the options would be if a) more realistic and more directly comparable travel times were included, such as how long it takes people to access the platforms and b) more realistic costs for light rail were used.

ALR have also included a graph looking at the impact of emissions from each of the options. The surface light rail option achieves carbon neutrality around 2041, while the two tunnelled options require a lot of concrete so have significantly higher embedded carbon to offset and therefore take longer to reach neutrality.

The ALR team have come up with the tunnelled light rail as their preferred option. However, interestingly, one board member, Ngarimu Blair, dissented for the following reasons.

What’s missing or should change

To me there are a couple of key things missing from the data presented.

Given the travel time savings data, it seems odd that an additional light rail option wasn’t included: we could call it a reverse hybrid option. In such an option, light rail would travel on Dominion Rd on the isthmus like the option above, but would then stick to the SH20 corridor like the light metro option. It would also be useful to have this option stay within the existing road corridor instead of expanding it, to see what that does to construction costs.

It would also be sensible to drop the section of the route between Queen St and Wynyard Quarter. This would save quite a bit of money, and remove one of the concerns ALR have which is that a tunnel may be needed in future. It would also leave open the option of a mode like Light Metro for the North Shore and Northwest.

Despite the talk of the need for high quality public transport, I was surprised there is no information about what kind of service levels are actually being proposed. For example: the capacity graph above suggests tunnelled light rail has more capacity – which presumably means they need to run more services to achieve that, but that’s not outlined in the information they’ve released.

Likewise, there’s no information on operational costs. While the media will fixate on the construction costs, over time it’s the cost of running services that really adds up, and could be a significant differentiator between the options, particularly if the light metro option is driverless. So for example while the light metro option is more expensive to build, the long term operational costs may help make it a more effective investment than the tunnelled light rail option. But we just don’t know.

The intention is that if approved by cabinet to proceed, ALR would be tasked with coming up with a more detailed business case which will result in things such as confirmed routes and station locations.

We think the costs of the tunnelled options, combined with the fact it appears ALR have leant on the scales to justify them, mean the government should choose the surface option but with a clear direction to optimise it for better outcomes. It may also be useful to get some fresh eyes on the project, instead of many of the people who have been working on the tunnelled solution for many years now, both in this process and the previous one.