The world’s longest sea bridge is about to open to traffic after a nearly eight-year construction period dogged by delays, budget overruns, crew deaths and accusations of corruption 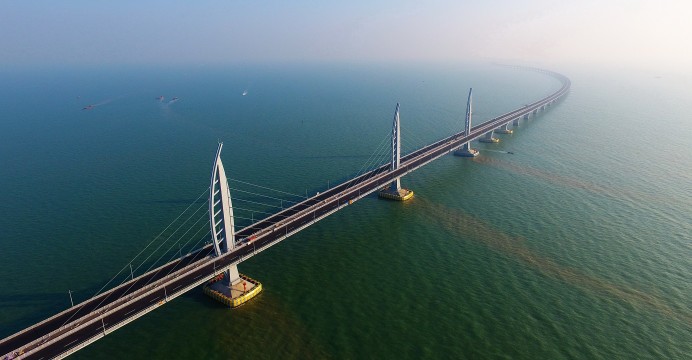 The 55-kilometre bridge and tunnel project links the two special administrative regions of Hong Kong and Macau with the mainland, heavily reducing travel time and bringing together up to 60 million people into a metropolis-style economy.

The highway becomes an undersea tunnel for more than six kilometres. 420,000 tonnes of steel used for the project – 60 times the amount used to build the Eiffel Tower.

The Hong Kong-Zhuhai-Macau Bridge is expected to be used by 40,000 vehicles on a daily basis. It is expected to last 120 years and reduce the travel time by 60 per cent.

A number of engineering challenges have had to be overcome including a soft and deep seabed which resulted in engineers having to drive more than 100 huge steel cylinders in to the sandy bottom which formed the foundations for two artificial islands.

The Hong Kong-Zhuhai-Macau Bridge is expected to last 120 years and reduce the travel time by 60 per cent.

‘The most challenging engineering project in the world’

The highway becomes an undersea tunnel for more than six kilometres which was designed so that vital sea transport would not be impeded.

Hong Kong International Airport’s flight path cuts right across the bridge which meant that engineers had to content with height restrictions.

The white dolphin population brought environmental concerns in regard to the effects of dredging.

“There were many nights where I couldn’t fall asleep, because there were too many difficulties during the construction,” Gao admits.

“Linking the 80,000-tonne pipes under the sea with watertight technology was the most challenging.”

More than 14,000 workers were engaged at the peak of construction and 300 ships on a bridge that has been designed to overcome earthquakes and typhoons.

China’s official Xinhua news agency said the 420,000 tonnes of steel used for the project – 60 times the amount used in the Eiffel Tower.

Price estimates for the bridge run to US$15 billion in what critics already claim is a white elephant.

Other critics argue the project is part of a broader effort by Beijing to gradually blend Hong Kong into the mainland and erode its distinctive political culture.

One of the designers of the bridge, Lin Wei, wrote in The Straits Times that the Chinese mainland’s engineering capabilities have made immense progress during the 20 years after the special administrative region’s return to the motherland.

“This bridge – constructed with the cooperation of Hong Kong, Zhuhai and Macao – is the most challenging engineering project in the world so far,” he wrote.

“That we have been able to accomplish it within seven years is something all Chinese people should take pride in.”