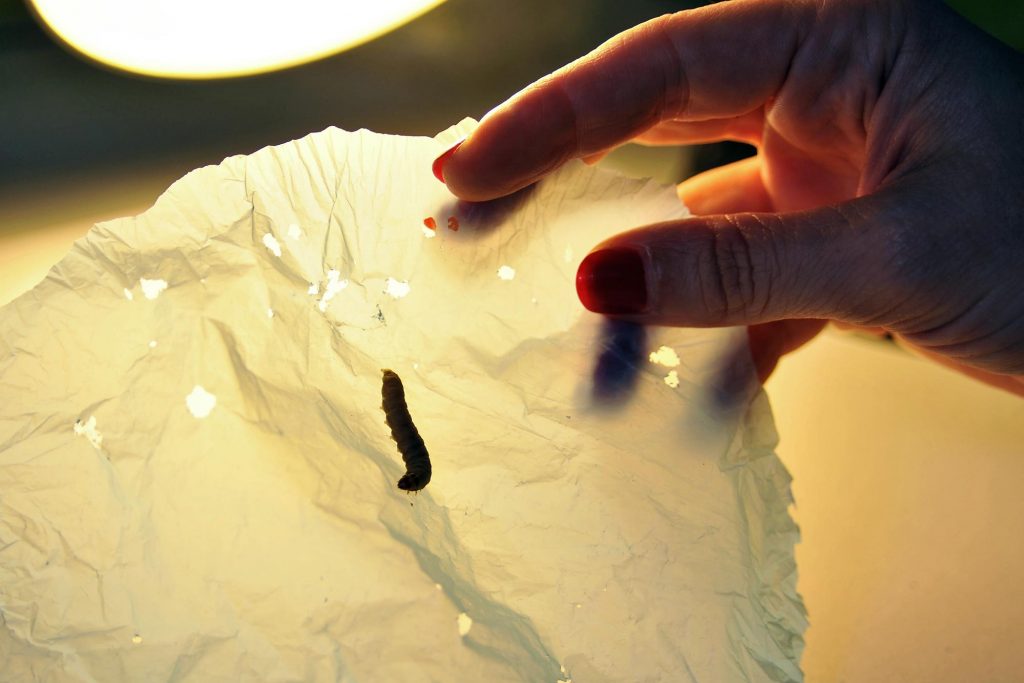 Each year, humanity churns out some 300 million tons of plastic and ships it around the world before dropping it into landfills. And the problem doesn’t stop there. In the half-century since plastic exploded into our lives, tiny bits of it have spread through our oceans, our ecosystems and even our bodies. So far, humanity has struggled to get rid of it.

But there may be new hope for a solution. Scientists say they’ve found a caterpillar that loves to eat this non-biodegradable waste. The insects won’t save us from our plastic pollution, but figuring out how they digest the garbage could help offer up a solution.

“Nature is providing us with a great starting point to model how to effectively biodegrade plastic,” says biologist and study author Christophe LeMoine of Brandon University in Manitoba. “But we still have a few more puzzles to solve before using this technology, so it’s best to keep reducing plastic waste while this gets figured out.”

LeMoine and his Brandon University team have been researching the caterpillar larvae of the greater wax moth. The researchers were particularly interested in how this caterpillar, together with the microorganisms in its gut — its microbiome — could break down and metabolize plastic. That work included separating out the bacteria from the waxworms’ gut and growing it on its own in the lab. They found that one particular species of bacteria could indeed survive on nothing but plastic for a year.

But it wasn’t just a miracle bacteria behind the diet. Instead, the scientists discovered a “very close working relationship” between the caterpillar and its gut microbes. Both can consume plastic on their own. However, when the two work together, it rapidly accelerates the plastic biodegradation. What’s more, the researchers found that caterpillars that ate plastic actually had dramatically higher amounts of gut microbes.

These caterpillars aren’t some mutant evolved for the modern world, either. These so-called waxworms are actually bee pests that invade beehives and live off the honeycomb.

To a human, gobbling up delicious honeycomb may not sound the same as munching on a plastic bag; but for these waxworms, the two are nutritionally equivalent. The researchers say that the structure of honeycomb wax actually consists of very long chains of carbon and hydrogen, molecules called hydrocarbons. These hydrocarbon chains are the same things that make up the fossil fuel-derived plastics used so ubiquitously by humans.

“The waxworm and its gut bacteria must break down these long chains (in honeycomb),” LeMoine says. “And presumably, because plastics are similar in structure, they can also co-opt this machinery to use polyethylene plastics as a nutrient source.” In fact, some of their gut bacteria even seemed to do better eating plastic.

How much plastic can a group of very hungry caterpillars eat? According to the scientists, about 60 waxworms chewed through a matchbook-sized square of plastic bag in under a week. Clearly, the world would need a lot of caterpillars to solve its plastic problems.

But LeMoine says that’s not really the point. “Waxworms are not an immediate solution to plastic pollution,” he says.

However, if scientists can unravel what makes these caterpillars and their gut bacteria flourish, they might be able to design tools to wipe out plastic. “A better understanding of how this synergy works may guide future efforts to design the ‘perfect’ plastic biodegradation system,” he says.