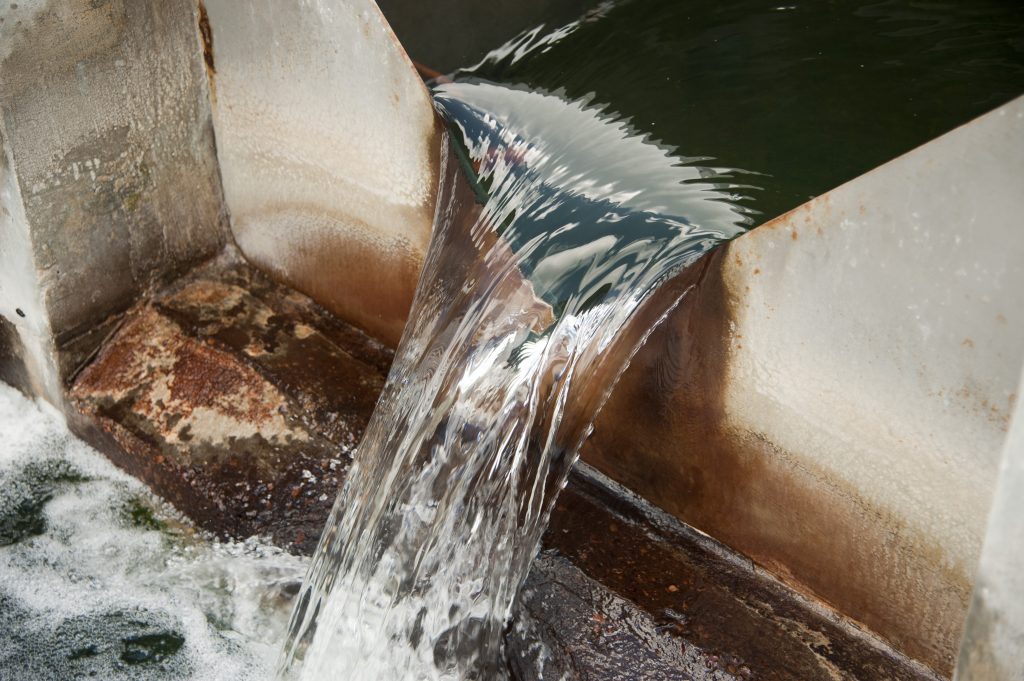 Reservoir levels around Sydney, the state’s capital, had dropped to record lows.

To stretch the city’s dwindling supply, Sydney Water tightened restrictions on water use.

The club, founded in 1923 and boasting a championship course, would get no more than 20,000 cubic metres of water per month, well short of the amount it normally used for watering.

But rather than cross their fingers and hope for the best, they took an unusual step: they requested permission to tap into the sewer line that ran beneath the golf course.

The club’s plan was to treat that sewage on-site and then use it to irrigate its 23 hectares of greens.

It might not sound glamorous, but “sewer mining,” as the Aussies call it, is catching on, not just in Australia, but also around the world.

As the name implies, it involves tapping into a wastewater collection system and siphoning off some of the sewage that’s moving through the pipes.

The sewage then gets treated and used for landscape irrigation, toilet flushing, and other nonpotable uses.

Many of the world’s dry regions now treat and reuse their wastewater to drought-proof or augment their supplies.

In 1968, the Namibian capital, Windhoek, startled the world by becoming the first city to reclaim its wastewater with advanced treatment processes and then drink it.

With annual rainfall of 370 millimetres and no perennial river within 750 kilometres, the city had few options other than to close the loop on its water system.

Initially sceptical, the residents of Windhoek have been drinking their reclaimed wastewater for nearly half a century with no outbreaks of disease or negative health effects.

Following Windhoek, most cities add an additional step: instead of drinking their reclaimed wastewater directly, they first send it to an aquifer or surface reservoir to dilute it and allow for some additional natural cleansing.

This cuts the costs of building and maintaining treatment plants and piping networks, reduce energy and chemical use, and save drinking-quality water for actual drinking.

These savings, in turn, keep more water in rivers, lakes, and streams – which is especially crucial during droughts and summer months, when river flows are low and water demands are high.

“Sydney Water initially couldn’t get its head around the concept (of sewer mining),” says Kurt Dahl, Managing Director of Permeate Partners, the consultancy that helps operate the Pennant Hills system.

The sewer pipe running through the golf course carries wastewater from about 1,000 homes to the coastal town of Manly, some 15 kilometres northeast of Sydney.

There the sewage receives only very basic treatment before being dumped into the ocean.

So Pennant Hills was tapping wastewater that would otherwise not only go unused but also pollute the South Pacific.

As long as the golf club siphoned off its new supply during peak hours of toilet flushing and showering–the morning and evening–it would not interfere with the pressure and flow rate needed to get the remaining sewage to Manly.

The little treatment plant sits unobtrusively adjacent to the tenth fairway, surrounded by trees and gardens. It produces virtually no odour.

The sewer-mining scheme has cut Pennant Hills’ potable water use by 92%, which earned the club an award from Sydney Water.

As a bonus, nitrogen in the sewage is transformed from a harmful pollutant into a valuable nutrient.

Pennant Hills has nearly eliminated its use of chemical fertilisers because small amounts of nitrogen get added to the greens each time they are irrigated.

Overall the system has proven to be a cost-effective way to drought-proof the links and reduce stresses on Sydney’s water supply.

Even the golfers are pleased. “Old-time club members say this is the best the golf course has looked in 30 years,” Dahl says.

What makes sewer mining feasible, and the reason it seems likely to catch on and spread, are advancements in a variety of treatment technologies over the last decade.

At the heart of the Pennant Hills system, which was designed by GE Water, a division of General Electric, is a technology called a membrane bioreactor (MBR).

After microorganisms treat the sewage biologically, the resulting product gets drawn through a membrane with microscopic pores that let the partially treated water through but block almost everything else.

The waste sludge, which constitutes about 2% of the original sewage, then returns to the sewer, while the treated wastewater gets disinfected with chlorine or ultraviolet radiation before being sprinkled onto the gardens and greens.

This MBR process has been in use for several decades, but in recent years both the cost and energy requirements of the membranes have declined substantially.

As a result, MBRs produce higher quality water and cost roughly the same as other technologies.

MBRs treat more than 3 billion litres of water a day, and installed capacity is growing rapidly.

Dockside Green, a six-hectare mixed-use development in Victoria, British Columbia, and one of the first planned communities to earn Platinum certification for Leadership in Energy and Environmental Design (LEED), uses an MBR system to treat all of its sewage.

The reclaimed water is used to flush toilets, irrigate the landscape, and add flow to a local creek.

According to Chris Allen, Regional Manager with General Electric’s Water and Process Technologies division, sewer mining, along with conservation measures, such as dual-flush toilets, water-efficient fixtures, and gray water systems, have reduced indoor water use by 65%.

Solaire, a 293-unit apartment complex in the Battery Park neighbourhood of New York City, is the first onsite water reclamation system in the US to be built inside a residential apartment building.

According to Allen, it recycles about 94,635 litres per day to the building’s cooling towers, toilets, and landscapes.

One of the world’s largest sewer mining projects is at Cauley Creek, a high-end community in Fulton County, Georgia, northeast of Atlanta.

As with Sydney’s Pennant Hills Golf Club, Cauley Creek residents became concerned that drought would lead to restrictions on water withdrawals from the Chattahoochee River, the source of their drinking water.

The community’s MBR system can reclaim roughly 19 million litres of wastewater per day, which gets used by area schools, churches, homes, and a golf course.

The on-site treatment and reuse allow more water to remain in the Chattahoochee, a river with an
exceptionally high diversity of fish, mussels, and other aquatic life.

In keeping with the community’s rural character, the treatment plant sits quietly inside a classic-looking red barn, complete with a weather vane.

Like Sydney, many coastal cities around the world discharge some or all of their wastewater, treated or not, into the ocean.

Shanghai, China’s most populous city, sends wastewater to the Pacific. So does Victoria on Canada’s Vancouver Island.

As the media spotlighted in the run up to the 2016 Summer Olympics, much of the sewage from the 12 million inhabitants of coastal Rio de Janeiro, Brazil, gets dumped into local waters without adequate treatment.

US cities and towns collectively discharge 121 billion litres of wastewater every day, a third of which gets treated and released to an ocean or estuary.

Each day that’s like throwing away a volume of water equal to 12 times the daily water use of New York City.

Consider Boston, Massachusetts. In the 1980s, when a judge ordered the state capital to stop dumping raw sewage into Boston Harbor, the municipality decided to build a new wastewater treatment facility on Deer Island, a peninsula that extends into the harbour.

Today, sewage from 43 greater Boston communities gets transferred to Deer Island, where it gets treated and then sent through a 14.5-kilometre tunnel that discharges into Massachusetts Bay.

Once swallowed by the salty sea, the treated water can be of no further service to the state’s communities or freshwater ecosystems.

As water supplies tighten, rivers dry up, wetlands shrink, and persistent droughts lead to water cutbacks, cities and farms are taking a new look at wastewater.

It is increasingly viewed not as a nuisance but as an asset.

For many activities – from toilet flushing to landscape watering to crop irrigation – water does not need to be clean enough to drink.

Matching water’s quality to its intended use opens up a whole new way of thinking about and managing water, one that can turn wastewater from a disposal problem into a valuable new source of supply.

If the whole idea of using wastewater raises eyebrows, it helps to remember that all water on Earth is recycled.

About half of the water flowing into the main reservoir for Houston, Texas, called Lake Livingston, is treated wastewater from the Dallas–Fort Worth area.

That wastewater flows for about two weeks in the Trinity River, where natural microbial and sun-driven chemical processes boost its quality further before it enters Houston’s reservoir.

There it undergoes still more natural cleansing before engineers run it through the city’s water treatment plant to remove remaining impurities.

After disinfection it is supplied to Houston residents for drinking, cooking, and other household uses.

During dry times, those wastewater flows from Dallas–Fort Worth make up most of the Trinity River’s flow; without them, the river would nearly stop flowing.

More and more, cities are incorporating the reuse of wastewater into their long-term planning. Windhoek and Orange County treat wastewater to such a high quality that it meets drinking water standards.

In others, the reclaimed wastewater serves nonpotable uses, such as irrigating lawns, parks, golf courses, and farms; replenishing groundwater; or creating wetland habitat.

California, a US leader in the practice, is estimated to reuse 826 million cubic metres of municipal wastewater each year, roughly equal to the water used by 1.4 million households.

Many industries are also turning to reclaimed wastewater as a secure, sustainable supply.

Some treat and recycle their own processed water, while others purchase reclaimed wastewater from a local utility.

In June 2016, Apple, the maker of computers and mobile phones, announced that it would pay for a new wastewater treatment facility in the central Oregon town of Prineville and use the reclaimed water to cool its data centres there.

By using recycled water, Apple will save Prineville 19 million litres a year.