You are at:Home»All News»Water»Infrastructure body welcomes irrigation investment
May 19, 2017 Water 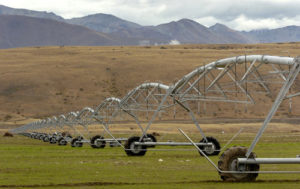 The government has announced $90 million of new funding for irrigation would be included in Budget 2017, including additional grant funding of $27 million and a capital boost of $63 million.

“Dependable water supply has a major impact on agricultural productivity, incomes and, in turn, the sustainability of New Zealand’s rural sector,” Selwood notes.

He says communities with poor access to employment, declining school rolls and population decline can be reinvigorated and all New Zealand shares in the benefit of new investment and stronger exports.

“The obvious limitation is assurance that additional water supply and related land use change does not lead to net environmental degradation.

“Where robust environmental analysis demonstrates irrigation can be provided within the limits of the receiving area, it is critical that other hurdles are reduced.

“Uncertainty about when and to what degree farmers will take up water contracts increases investor risk, raising the cost of irrigation schemes and making water more expensive.

“This has the reinforcing effect of disincentivising farmer uptake and delaying further investment which otherwise will deliver a sustained economic and social benefit to New Zealand.”

It is in such instances that government intervention is essential, Selwood maintains.

“Where the government acts solely as a lender of last resort, it does not solve the problem at the heart of irrigation.

“Loaned money must be paid back at an agreed rate on agreed terms, meaning the risk of water uptake remains with investors and projects struggle to move forward.”

However, he says “very positive outcomes” have been achieved in situations where the government acts as a co-investor to get projects over the line and realise public benefits, as it has done with the immensely successful Ultra-fast Broadband initiative.

“In irrigation, the government has an opportunity to invest capital in proportion both to its commercial risk exposure and the wider social and economic benefit to communities,” Selwood concludes.

“If today’s announcement signals that the government is ready not only to lend but to invest in a stronger rural economy, then it is very welcome.”