You are at:Home»All News»Transport»“Iconic” new airport terminal for Tairāwhiti
May 28, 2018 Transport 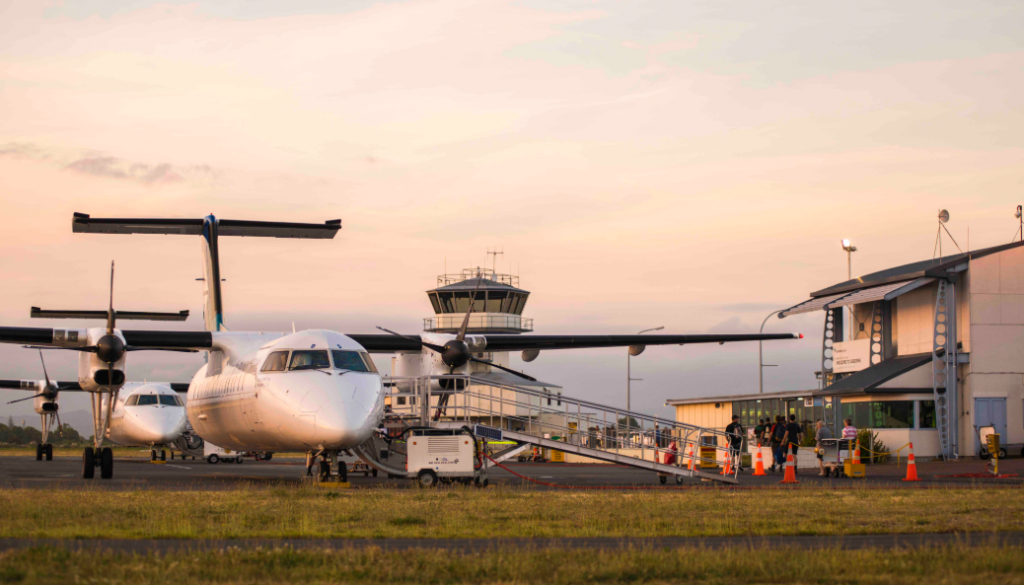 The region’s ambitions to become a significant player in the national and international tourism market have taken a major step forward, with the announcement of a new terminal for Gisborne Airport.

Gisborne District Council, which owns the airport, announced they have signed a Heads of Agreement, giving way to a 30 year lease with Eastland Group. The locally-based infrastructure company has operated, managed and developed the airport since 2005.

With the agreement signed, the long-discussed terminal redevelopment project can now get underway.

“It’s important to progress with redevelopment, so that we have an airport we can be proud of and reflects who we are as a region.”

“Collaborating together with Eastland Group and tangata whenua to link projects under the Tairāwhiti Navigations programme will ensure visitors and locals are shown a unique point of difference that is distinctly Tairāwhiti – whether they are arriving, leaving or enjoying our many iconic sites across the city.”

Eastland Group Chief Executive Matt Todd says that there is no doubt the current terminal building, built in the 1960s, needs to be significantly upgraded.

“From a purely practical point of view, it needs earthquake strengthening, and to be expanded to accommodate larger planes and greater numbers of travellers.

“We’ve been working closely with Air New Zealand and other stakeholders on what is needed to future proof the building.

“But the opportunity is much bigger – we have a chance to be genuinely visionary.

“The airport is a vital gateway to the region and, together, we’re uniquely positioned to create an iconic terminal that showcases and celebrates the stories of Tairāwhiti.

“We look forward to working with our partners and sharing the journey with the community as the new terminal takes shape.”

Ngai Tāwhiri, a hapū of Rongowhakaata, are deeply involved in the development of the terminal design.

“The core design and artist team contributing to the development of the airport is drawn from this team,” says Ngai Tāwhiri Working Group member Lisa Taylor.

“We are working in partnership with Eastland Group in the design and development of the new Gisborne airport and towards the replanting of the Waikanae stream, with stage one planned from the Gisborne Airport through to Te Kuri-a-Tuatai marae.

“We are very excited at the prospect of building on this relationship from a hapū/iwi perspective, and see this as a strategic move in establishing local knowledge regarding the mana whenua of Ngai Tāwhiri, Rongowhakaata.

“We are thankful for the proactiveness of Eastland Group in engaging with us, and look forward to future projects where the histories and stories of our hapū can be shared with the world.”

“The collaboration between mana whenua and Eastland Group is critical on a number of levels. It demonstrates great stewardship of what is ultimately a community asset, and a deep respect for our culture and heritage.

“From an economic development perspective, it will add real value to the region’s First Light brand and our tourism offering. Because of this collaboration, when you stand in this terminal, you will know you are in Tairāwhiti.

“We look forward to understanding the final scope of the project and exploring the Trust’s role, alongside other partners, in developing an airport that helps cements the region’s tourism aspirations,” he says.

The project is now being scoped, with expressions of interest being sought from building companies.

Eastland Group, as the commercial operator, will invest some of the money required.

It is also in ongoing talks with Eastland Community Trust and has applied to the Provincial Growth Fund (PGF) for funding towards the project.

In terms of timings, Todd says: “We’re working to fast track the construction to minimise disruption and deliver it as soon as possible.”

When Air New Zealand Chief Executive Christopher Luxon was in Gisborne recently, he described the proposed designs as “absolutely fantastic. The airport will be a great gateway to the region.”

The concept drawings are due to be released next month.

There will also be ongoing opportunities for the community to share their ideas on how our region is showcased within the terminal.