An innovative water treatment plant in south-eastern Australia was a fitting finalist in one of the world’s major infrastructure awards. 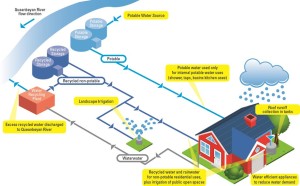 The AU$7 million Googong Water Recycling Plant project that was designed and constructed by MWH Global was a strong contender in the prestigious Bentley Systems Be Inspired Awards 2015 programme.

The global awards recognise the world’s most outstanding infrastructure achievements, and Googong was a worthy candidate in the Innovation in Water Treatment Plants sector given the numerous challenges the project faced.

The plant is an integral part of the ambitious plan to build an entire new town in the Australian Capital Territory southeast of the capital Canberra that will be home to around 18,000 people when it is finally finished in some 25 years.

An efficient and reliable water recycling plant (WRP) was a key requirement for the project, which is being developed on the boundary of two states by Googong Township Proprietary Limited, a partnership between Canberra Investment Corporation and leading integrated real estate company Mirvac.

The plant is a major benefit not only to the developers but also to the first 6,200 homes that comprise Googong Township, removing the need to cart sewage by truck to a wastewater treatment plant in Canberra. The plant uses Membrane Bioreactor (MBR) technology.

“The Googong township is a large-scale residential development designed around an integrated water cycle and with a dedicated water reclamation plant designed to reduce potable water consumption by 62 percent,” MWH Global CAD and Civil team leader Steve Coyle explains. “This is an ongoing staged construction and we have been involved for since 2007 as advisor and master planner as well as design consultants.”

MWH’s integrated water cycle concept sees a precious resource that is often used in such mundane areas as flushing toilets, watering lawns and washing cars supplied instead from a water recycling plant, and used together with collected rainwater.

Given temperatures that can climb as high as 39° Celsius, and frequent dry spells that can turn to debilitating drought, the MWH team elected to implement a dual system. “This would see potable water used for personal domestic use such as cooking and drinking while recycled water would be used for toilets and washing machines – in fact, more than half of it will be used for irrigation.”

The Googong WRP treats sewage from the Googong township to meet two functions:

The resulting concept design for the Googong WRP was developed in consultation with the various relevant authorities, including the New South Wales Environment Protection Authority and the state’s Office of Water.  “Sewage enters the WRP from two pumping stations, arriving under gravity via submerged gravity pipeline from one and under pressure from the second,” Coyle explains.

The MBR is based on a 4/5-stage bardenpho process with the ability to operate as a 5-stage process to achieve biological phosphorus removal and minimise chemical consumption. This allows the removal of phosphorus without impacting on the 90 percentile effluent total dissolved solids limit of 700 milligrams per litre. “Recycled water produced by the WRP is pumped to the Interim Recycled Water Reservoir as part of the second stage of development,” Coyle adds.

The inlet works channels and equipment, bioreactor, biosolids thickening equipment, biosolids digestion tank, biosolids feed averaging tank, and biosolids dewatering and handling equipment are enclosed and/or covered as required to ensure compliance with the approval conditions for site odour management. “The extracted foul air is treated in dedicated activated carbon vessels and discharged to the atmosphere via a stack,” Coyle assures.

The company utilised resources from various MWH offices including Sydney, Melbourne, Brisbane, Auckland, Christchurch and Pune, India to simultaneously deliver version-controlled drawings, models, and i-models to the client on site. “Information mobility was critical throughout the project given the multi-site design team,” Coyle adds.

A major challenge was the sloping terrain overlaying rock formations, which required the optimum cut-and-fill ratios to minimise rock excavation while overcoming a fall of over six metres with a very large number of buried pipes in the overlaying rock.

“The deeper we went to avoid clashes, the more rock had to be excavated,” Coyle recalls. “The treatment plant was also close to houses, unlike most treatment plants which are located well away from residences.”

The first major task was tie-in of the DN1800 pipeline which is the main water supply pipeline to Australia’s capital, Canberra. This had to be accomplished within a six-day window and involved sealing DN1800 spool pieces with millimetre accuracy while keeping site work to a bare minimum. “Each circumferential weld took six hours – and there were four welds in total.”

The initial site survey was followed by excavation of earthworks and the installation of temporary supports on day one, removal of the old sections on day two once the base was in and the placement of the lobster back bends on day four.

“Day five was the most crucial as that was the day we dropped in the final spool – there were a lot of very nervous people monitoring the progress and checking the previous day’s photos to ensure we were on the right track,” Coyle admits.

The six-metre fall made the yard piping layout in the WRP extremely complex, so the MWH team used intelligent 3D modelling applications that calculated the most efficient approach. “We applied three levels – services, process and drainage.”

MWH had to maintain 300mm separation of the gravity lines, utilising sophisticated computer software to detect potential clashes on a site model that had been split into six plans, each with an individually numbered set-out point with easting.

“Throughout the process we were working closely with construction as the constant changes from the construction team not only meant altering the model but also the associated engineering activities.”

Fitting in all the piping also became a major problem, particularly in the bioreactor area where space was at a premium. “Another reason for the tight layout was the fact that most of the pumps were located on the opposite side of the bioreactor from the residences to reduce noise.”

The trials and troubles were worth it, however, as MWH delivered the Googong WRP drawings on time and enjoyed several major benefits by engaging stakeholders, operations, maintenance and design staff in early 3D reviews that minimised changes later in the process. “By utilising design staff working in different time zones, we were also able to meet the demands of a tight schedule.”

Googong’s WRP has now started treating wastewater from Googong homes and will eventually service one of Australia’s first, purpose-designed, large-scale, water efficient communities; allowing 18,000 people to use the same amount of water that would traditionally sustain less than 6,500.

“After commissioning and an operating period the developers will gift the WRP and associated infrastructure to the council while we will use the experience and skills gained in this project on similar initiatives around the world,” Coyle says.