You are at:Home»All News»Transport»Flying Taxis to be Tested in Singapore Skies
January 21, 2019 Transport

German aviation startup Volocopter has announced it will perform the next set of inner urban flight tests, as it expands its business operations into Singapore, The Urban Developer reports

“Singapore is a logical partner. The city is a true pioneer in technology and city development,” Florian said.

Volocopter, welcomed by the Civil Aviation Authority of Singapore, Ministry of Transport and the Economic Development Board, will work to create the scope of flight trials before flight tests can commence in the second half of 2019.

Earlier this year, ride sharing giant Uber announced it hopes to offer rides through a new UberAir service by 2023.

Advancements in urban mobility hopes to solve the problem of congested cities and traffic problems with innovative transport systems such as flying cars, or eVTOLs. 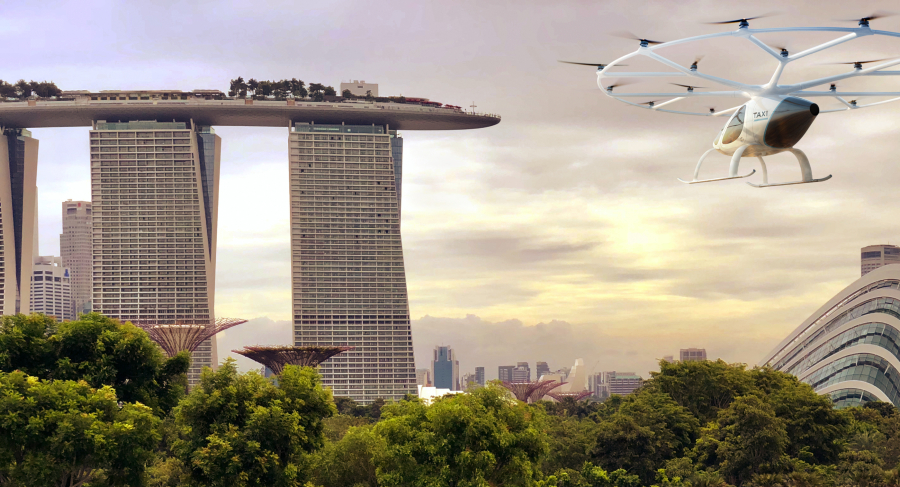 Flight tests will be designed to verify the ability of Volocopter’s eVTOL vehicles to operate in Singapore’s urban landscape. Photo: Supplied

Volocopters are emission-free, electrically powered aircrafts that take off and land vertically. They operate quietly that at a flight height of 100 metres, it isn’t heard over the typical background noise of a city. No pilot, the Volocopter 2X is operated by a single joystick which controls altitude, balance and landing.

Volocopter’s vision is to integrate air taxis within existing transportation systems, providing mobility for up to 10,000 passengers a day.

“Their decision to set up a local product design and engineering team in Singapore is a testament to Singapore’s aerospace engineering talent, as well as our prime position for industry players,” EDB Singapore executive director Tan Kong Hwee said.

To support its expansion plans in Singapore, Volocopter will be setting up a local product design and engineering team.

The company will also partner with real estate developers and mobility providers in Singapore to establish infrastructure to support flight testing.

The series of test flights are scheduled to take place in the second half of 2019.

This article was first published by The Urban Developer