You are at:Home»Australia»Emerging challenges in Australia’s infrastructure
October 16, 2019 Australia

Australia has helped lead innovation in infrastructure planning, financing, and delivery, but new challenges now create a need for change in prioritisation, design, and productivity 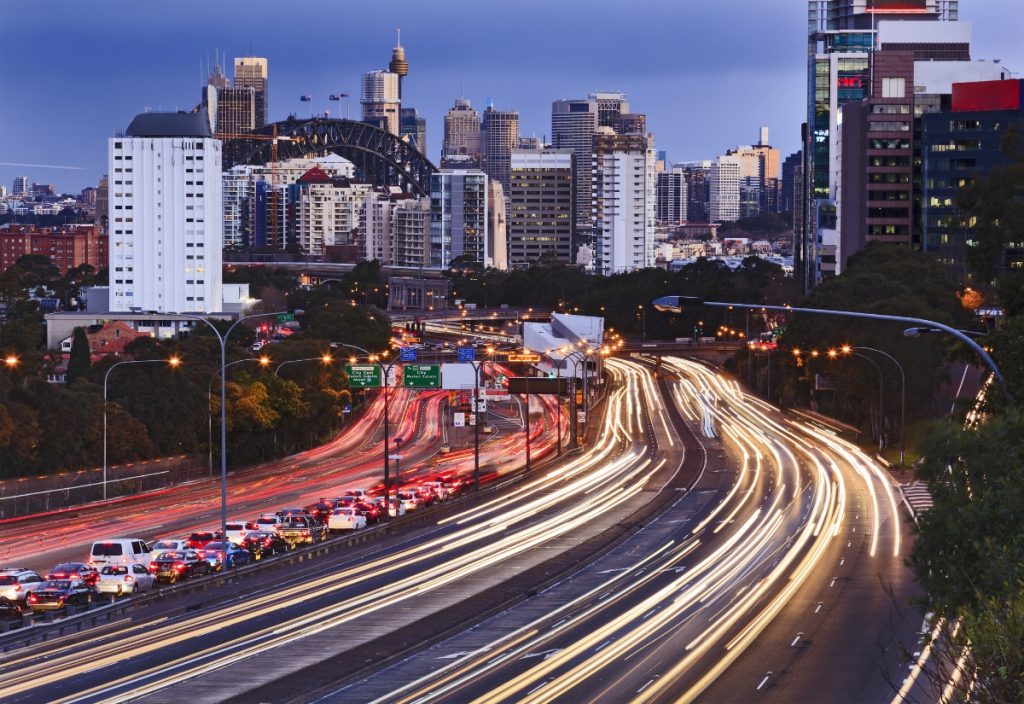 Australia is among the most advanced economies globally in effective collaboration between the public and private sectors to deliver transport, energy, and social infrastructure. It has also become a leader in private infrastructure investment, as managed funds seek opportunities in a sector that makes a major contribution to the Australian economy in jobs, growth, and exports. The country spent around AU $1,177 (US $9061 ) per capita on transport infrastructure in 2017, ranking second among Organisation for Economic Co-operation and Development countries.

However, challenges—especially around Australia’s ability to meet infrastructure demand—are set to intensify in the future. Australia’s population is projected to grow to 40.6 million in 2050,2 largely driven by growth in two major cities, Sydney and Melbourne.3 It faces an infrastructure gap: the McKinsey Global Institute estimates the gap between current infrastructure investment levels and needs (2017 to 2035) to be 1 percent of GDP.4 To meet the demands of this rapid, urban population growth, Australia is investing in transport, utilities, and social infrastructure at an unprecedented scale, with investment in projects with value greater than AU $50 million climbing from around AU $26 billion in 2016 to an estimated AU $77 billion in 2020. 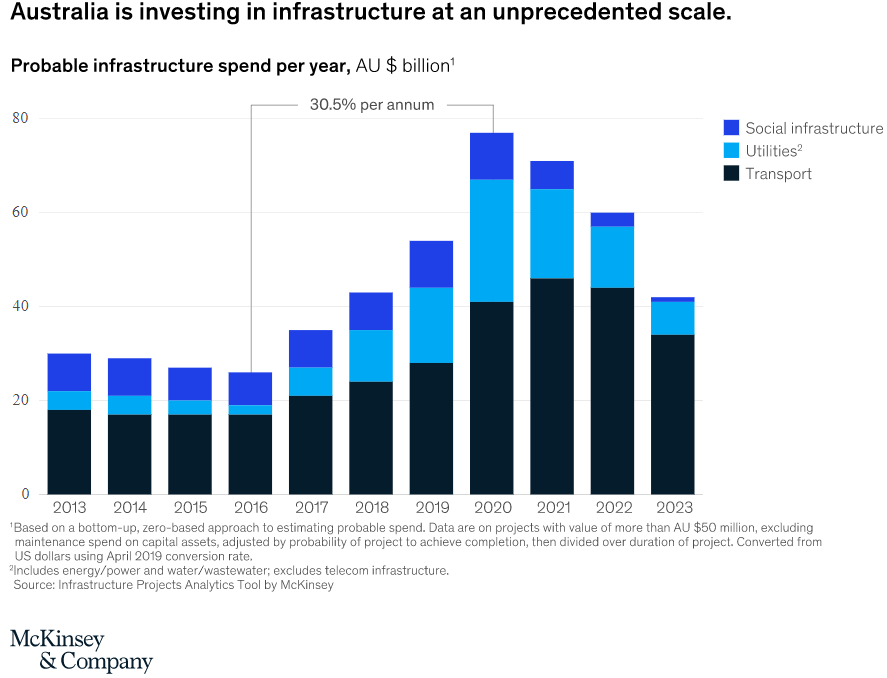 Challenges in the shape of technology-led disruptions around the future of mobility, a clear need to reassess traditional commercial models, stagnating productivity, expected skill shortages, and the impact of major concurrent projects on city residents are now adding further complexity to Australia’s infrastructure needs. In the face of such emerging issues, there is an urgent imperative for participants in Australia’s infrastructure sector to innovate across six dimensions.

Technology, digital, and data analytics are disrupting urban mobility, leading to uncertainty around future investments—and opening up new possibilities for constructing and operating infrastructure assets. New trends such as the uptake of electric and autonomous vehicles (implying increased road capacity, vehicle charging infrastructure, and curb modifications), smart-city technology, the future of work (which will dictate travel patterns), and increased regulation and awareness of climate impact require infrastructure stakeholders to conceive an integrated vision of future mobility requirements for people and freight. Delivering this vision will mean developing scenarios around the impact on transport infrastructure demand and translating them into future-proofed strategic prioritisation of capital and resources at the portfolio and project levels. Examples include developing a point of view on the optimal share of investment between road and rail, identifying and developing new competencies and processes to achieve this future state, and creating a road map of initiatives and enabling actions (such as changes to planning, creation of a “future mobility hub,” and setting clear technology standards and safety requirements).

Current project-development and -assessment processes do not facilitate rapid, needs-based prioritisation. Meeting future infrastructure needs will also mean being more “shovel ready” by going to market with the right projects more quickly. There are limitations to current metrics, such as benefit-cost ratio and net present value, and decisions can also suffer from inherent cognitive biases. Streamlining the business-case process can enable political decisions to be based on the best possible supporting evidence while providing timely analysis. Stakeholders could consider addressing these issues by focusing metrics on strategic objectives, applying debiasing techniques to improve decision making, developing capabilities to perform rapid strategic option analysis, and prioritising projects within specific investment categories.

Increasingly complex projects expand the difficulties in preventing cost overruns and delays, highlighting the need for a more innovative approach at the project design stage. Currently, decisions are frequently taken from a capital works perspective rather than a whole-of-life optimisation frame; there can often be a lack of integrated perspective and ownership, leading to poorly considered decisions that destroy project value. Project owners are frustrated by traditional value-engineering approaches that tend to achieve only incremental benefits and take months (or years) to complete. Projects can suffer from misaligned incentives, and regulations can hinder design innovation. Ways forward include combining an agile approach with design-to-value methodology; using a rigorous framework for progressive, continuous, and stage-gated design; and industrialising aspects of the design process.

As the scale and risks—and costs of bidding—associated with transport-infrastructure projects climb, aspects of the market’s traditional risk-transfer model are leading to declining competition within public tenders. On Australia’s two most recent public-infrastructure megaprojects, the owner struggled to attract more than a single bidder. McKinsey Global Institute research suggests that contractors and suppliers consider contractual structures and incentives to be the principal hurdle to achieving productivity on projects—transaction complexity and regulatory burden add unnecessary cost and delays and prevent high productivity.5 Additionally, multiple, concurrent construction projects can cause significant disruption for communities. To address these issues, stakeholders could consider streamlining the regulatory burden, increasing collaboration in contracting, reforming the tender process to promote competition, and bundling contracts to take advantage of economies of scale.

There are capability and capacity shortages with regard to the personnel required to plan and deliver new infrastructure projects. We analysed three potential future scenarios and found that Australia could potentially need an additional 260,000 to 385,000 infrastructure construction workers over the coming years (Exhibit 2), if the projected pipeline materialises. There is an immediate need for more skilled workers, likely to be exacerbated by the coming ramp-up of mining production—potentially leading to labour inflation. Ways to bridge the capacity and capability gap going forward include managing both the demand for workers and their supply, including upskilling the current workforce, reframing the culture of the industry to retain more talent, and seeking ways to increase the talent pool and train the future workforce.

Stagnation in construction productivity results in high costs for taxpayers and significant project margin erosion for contractors globally. Improving on-site execution through well-executed optimisation practices—such as lean construction techniques, performance management, effective project management supported by an active project management office and control tower with efficient planning and project controls—could help boost productivity by up to 10 percent.6 This focus is fundamental and needs to underpin all efforts in boosting productivity. However, we do not believe it will be enough; the sector will need technology to help it make the change necessary to bridge the productivity gap. McKinsey research indicates that technology is the most promising lever for improving productivity, with an approximate 15 percent impact—47 percent of the work done in construction has automation potential.7