You are at:Home»All News»Environment»Drone swarm to aid in post disaster location
February 12, 2017 Environment

University of Canterbury researchers are working with Japanese colleagues to develop technologies that will enable swarms of drones to locate and potentially triage people buried in the wreckage and debris of natural disasters. 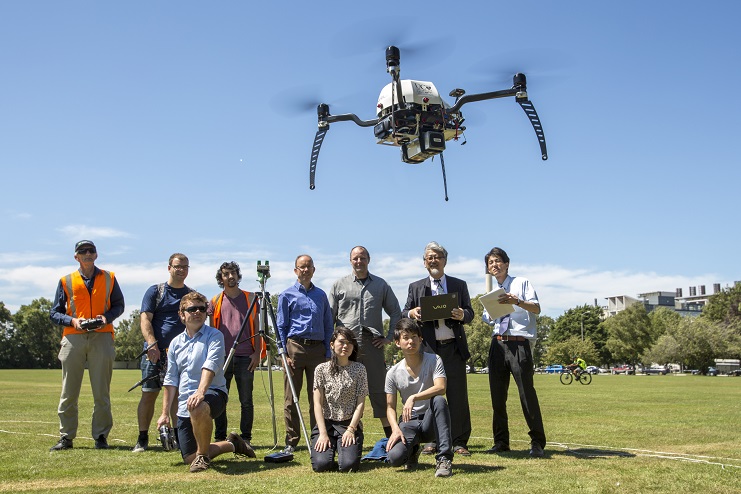 The University of Canterbury’s Wireless Research Centre (WRC) has been hosting Professor Ryuji Kohno and research colleagues from Yokohama National University, who are collaborating on the use of drones, or Unmanned Aerial Vehicles (UAVs), for search and rescue in large-scale emergencies.

WRC Research Leader Dr Graeme Woodward says researchers from the new UC DroneLab and their Japanese collaborators are developing technology to enable swarms of drones to locate, and potentially to triage, casualties by flying formations over major disaster areas after earthquakes and tsunamis.

The recent establishment of the UC DroneLab coincided with a call for proposals from the Japanese Society for the Promotion of Science and the Royal Society of New Zealand to work in technologies that can assist in major disasters.

“Professor Kohno has significant expertise in Body Area Networks (BANs) which are the devices the drones would use both to locate casualties and to collect data about the status of those located,” Woodward says.

“BANs are interconnected devices which are either implanted, attached or carried on the body. Examples are sports applications where a chest strap is connected to a wristwatch to determine heart rate, or a motion sensor measures footsteps and sends the data to another device.”

Woodward explains that WRC researchers are looking at different ways a BAN signal could potentially be located by the swarm, and also at the different types of signals that may need to be catered for.

The research has two objectives; to use multiple drones to locate people under rubble, and to collect information contained in the BANs those people are wearing.

Another aspect of the research is around operation of the swarm. Standard practice with a drone is to have a pilot who controls the craft, with another person operating the camera mounted underneath the drone.

“We don’t want to replicate that with a whole swarm. Ideally, we would want one or two people to control the swarm which must be able to operate autonomously, while the drones also need to be able to communicate between themselves,” Woodward explains.

“We are also looking for complementary projects that can provide further funding to develop drone swarm capabilities, and have had some success with Scion around detection and monitoring of hotspots in bushfire situations.”