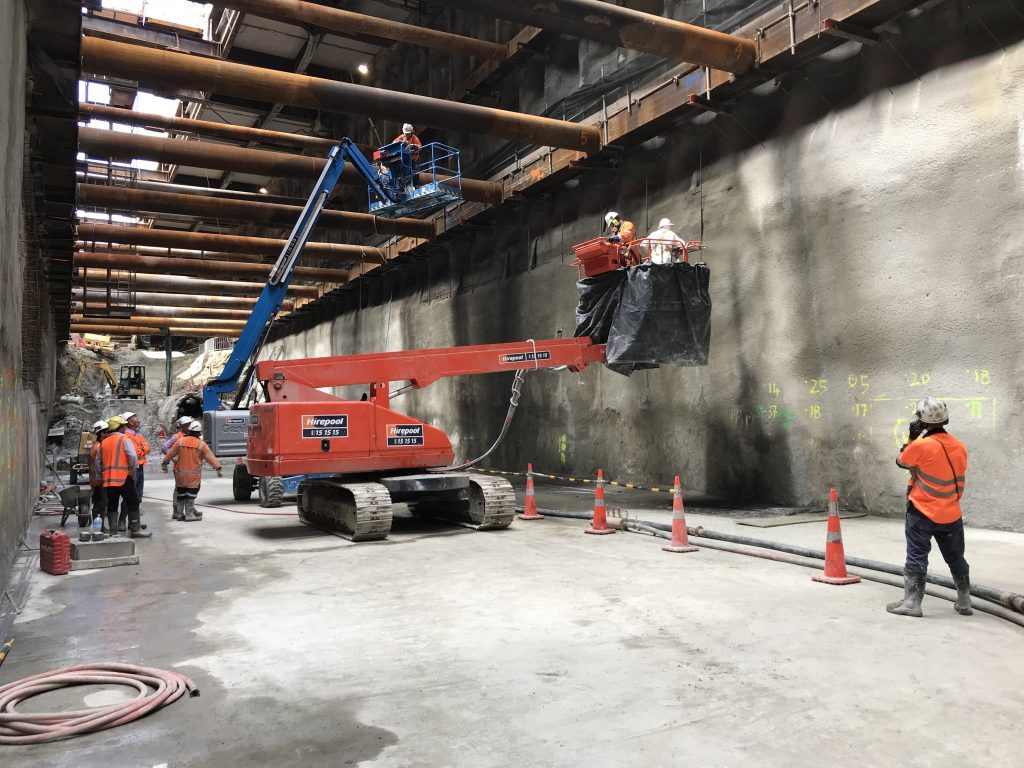 The Connectus joint venture team is delivering Contract 2 for City Rail Link Limited (CRL), which is creating a 3.45km twin-tunnel rail link up to 42 metres below Auckland’s city centre.

Contract 2 represents about 10% of this project and involves the construction of rail tunnels within the Albert Street road corridor from Customs Street West to Wyndham Street, together with a new stormwater line from Swanson Street to Wellesley Street, and a large number of underground utilility works.

Bulk excavation of the cut-and-cover trench on Albert Street continues towards the Customs Street intersection.

Behind the excavation stage, the team is preparing to start the tunnel box. This means installing steel mesh and pin into the wall of the trench for temporary rock support.

This is followed by ‘shotcreting’: spray-concreting a smooth surface for the waterproofing membrane of the tunnel box. The shotcreting team is currently completing the first 44 metres section of wall.

The last preparation step is the ‘blinding layer’: pouring concrete on the floor of the trench to form a flat, smooth layer for the concrete slab that holds the tunnel rails. The first 44 metres of blinding is already complete.

Once those steps are completed the tunnel box can start being built. The first tunnel box is scheduled to start at the end of February 2018.

The team will then start the construction of 29 sections of tunnel box, each 12 metres long.

The waterproofing membrane is installed on the floor and walls, steel reinforcement is fixed for the base slab, and formwork installed before finally pouring tunnel concrete.

Once about 60 metres of the tunnel box is constructed, the team can start backfilling.

These steps will be followed, stage after stage, for approximately 350 metres of tunnel.

Connectus Tunnel Box Project Engineer Thomas Jefferd says: “After just over two years the permanent works is finally starting and we are about to commence what we are here to build, the tunnel box itself.

“The team has worked very hard to get to the where we are, and the stage is now set for the next 12 months of concrete construction.

“It will be a very busy and challenging duration working in an 18-metre-deep excavation in the middle of a live CBD street.

“For people wishing to see the works progress we have constructed two viewing platforms at Wyndham and Swanson streets.”

Highlights of the coming year’s schedule include: 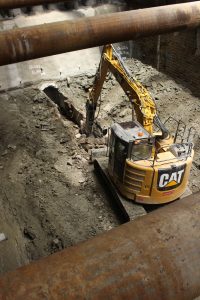 The redundant stormwater pipe being demolished

The removal began on the 100-year-old stormwater pipe sitting at 18m deep at the southern end.

The bottom of the trench and the stormwater pipe are shallower as the excavation moves towards the north reaching a depth of 8m at the far end, where the redundant pumping chamber was located.

The team also installed the last of the 201 concrete slabs that form the construction and public traffic lanes along Albert Street. In total, the slabs weigh approximately 1339 tonnes.

Connectus Site Engineer Aaron Ghazal says “It’s a great achievement for the team and another milestone reached for the City Rail Link project.

“It took about seven months to complete the construction and public traffic deck, which included the pre-works, digging, removal of the top 1.5 metre of the road and protection of utility services.”

Albert Street was re-opened between Swanson and Customs Streets at Christmas, with motorists using the section supported up to 16 metres in the air while underneath, bulldozers, diggers and shotcrete workers continue to build the CRL tunnels.

Connectus has poured the first 44 metres of concrete for the tunnel box, near the Auckland District Court and the Wyndham Street viewing platform.

“But the team worked very well together to complete the job.”

A new stormwater main had to be constructed along the eastern side of Albert Street, between Swanson and Wellesley Streets.

This was done by pipe-jacking (micro-tunnelling), replacing the existing line that ran along the centre of Albert Street, in the path of the future CRL tunnels.

The Orakei Main Sewer was also strengthened underneath the future Aotea Station.

The last two shaft sites on Victoria Streets were finally completed and removed just before Christmas.