You are at:Home»All News»Water»Cast-in-place pipe epoxy cuts cost of pipeline leaks
May 4, 2018 Water 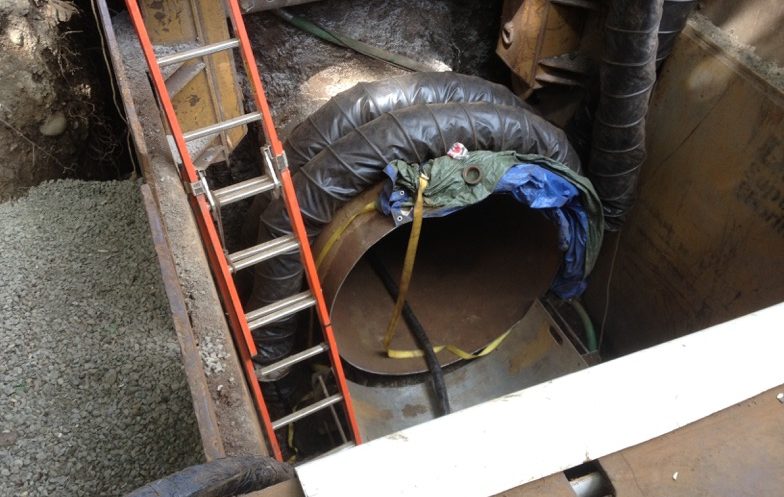 It is becoming increasingly difficult to efficiently manage the many thousands of kilometres of pipelines that are buried beneath cities and towns.

This infrastructure represents many billions of dollars of investment by governments and companies over many years.

Beneath Sydney alone, there are hundreds of kilometres of steel pipes ranging in diameter from 200 mm to a metre, most of which have been safely in place for many decades.

The continual expansion of urban environments makes accessing these pipes difficult when repairs are necessary.

Maintaining the structural integrity of pipelines—both the coatings and linings—is essential for safety of the asset and the surrounding environment.

During the past decade or so, infrastructure owners and operators have been regularly monitoring the “health” of the pipes under their care.

Cameras have been sent through pipes to visually check for damage, along with ultrasonic and other testing systems used to take measurements of pipe wall thickness.

After clearing out any obstructions, pipes can be readied for relining where required.

Large ruptures of pipes requires the damaged sections to be dug up and replaced.

However, according to Peter Morgan, Managing Director of Rhino Linings Australia (RLA), there are now methods available to repair breeches that can be carried out without the expense of disrupting roads, railways and other public or private property.

A mesh sleeve—like a large tube sock—is soaked in the resin and then pulled through a length of pipe.

The sleeve is inflated with air or steam to conform to the contours of the pipe and allowed to cure, forming a new, smooth inner surface.

The system can even contend with pipes that have bends up to 90-degrees in them.

Morgan says that the CIPP method was increasingly being used by councils and utility companies throughout the region to repair water and sewer pipes.

“CIPP is ideal for both the structural and lateral water pipes in our cities,” he adds.

“Structural are the main pipes usually found under roads, while lateral are those that run from the street to a property.”

The resin and hardener system provided by Rhino Linings for use in pipe rehabilitation is designed to have a life span of a minimum of 50 years.

This life span is dependent on using the system in accordance with Rhino Linings Product Data Sheet and following the methods of the relevant Standards.

Morgan says “Depending on the constraints and requirements of the project, there are a range of hardeners that essentially provide fast, medium or slow curing times.”

The fast-acting curing agent allows for a less invasive replacement procedure allowing projects to be completed on time and within budget.

While initially known for its spray-applied ute tub liner, over the years RLA has expanded its product capabilities to provide a wide range of industrial spray-applied protective coatings for mining, military, infrastructure, water and waste water applications.

Rhino’s Flooring Division manufactures and distributes a decorative range of epoxy and polyurethane floor coatings for residential and commercial use.

The Gold Coast-based company has been manufacturing CIPP resins for several years, but many companies involved in the relining industry still buy the material overseas and have to contend with the many supply delays and disruptions.

All products RLA manufactures in Australia—from its traditional ute linings, polyurethane and polyurea protective coatings through to polyaspartic and epoxy floor coatings —are regularly tested to ensure continued compliance with appropriate Australian Standards and international guidelines.

“A large part of the CIPP market is in water and wastewater so we made sure that the material we supply to our customers meets the highest standards,” Morgan assures.

“It has been challenging to overcome the reticence of some in the industry to use our Australian-made product.

“RLA’s parent company in the USA became a major part of the epoxy lining market when it was the only manufacturer that met the specifications of the massive transport infrastructure project in the US city of Boston known as “The Big Dig.” (The 15-year project was the largest transport infrastructure undertaken in the USA.)
The company supplied the epoxies that were sprayed by massive spray machine to seal and protect the inner surfaces of the kilometres of tunnels that were dug beneath Boston’s CBD, Charles River and bay area.

Since its inception in 1988, Rhino Linings’ mission has been to develop, manufacture and distribute top-quality, high performance hybrid polyurethanes, pure polyurea, polyurethanes and epoxies.

RLA’s epoxy division has been specialising in the development of high performance matrix resins for use in CIPP applications since 2010.

From its Queensland facilities RLA is able to provide a streamlined inventory model and prompt shipments to all locations across the Australasian region, regardless of quantities required, enabling clients to have confidence in an uninterrupted material supply.