You are at:Home»All News»Transport»Bridge corrosion a costly problem
March 21, 2018 Transport

Degradation of bridges caused by many different factors, including corrosion and other stresses from both the environment and heavy vehicles passing over them, costs millions of dollars annually 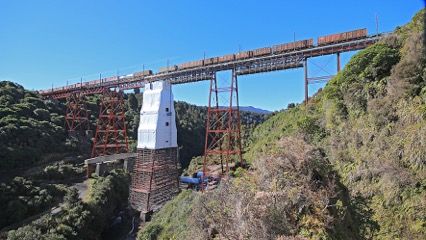 The yearly cost of asset maintenance in Australia alone is estimated to be approximately A$32 billion.

Avoidable corrosion damage accounts for A$8 billion of this and continues to have a major economic impact on industry and the wider community.

The proportional costs and impact of corrosion are similar for most countries in the Asia Pacific region.

Corrosion will affect all types of metals to varying degrees of severity and speed.

Unless comprehensive management plans are developed and implemented, steel and other metals will ‘rust’ and reinforced concrete will spall and crack.

Corrosion can be prevented or minimised by either ‘isolating’ the material from its environment with some sort of coating or implementing an active intervention system such as cathodic protection.

The environment and prevailing climatic conditions also contribute to the degradation of bridges.

The largest cities in the region are either in coastal or tropical zones, with some even exposed to the combination of both.

Bridges in Darwin and Brisbane, along with many other cities throughout the region, can be impacted by extreme wind speeds of tropical storms in addition to the high levels of airborne salt found in coastal locations. 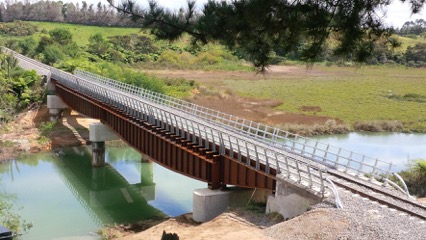 Bridges also carry massive loads from moving vehicles which impose vibrational and other stresses onto structures.

Approximately 200,000 cars and trucks cross Melbourne’s Westgate Bridge each day, making it one of the country’s busiest road corridors.

Sydney’s Harbour Bridge carries 160,000 vehicles each day between North Sydney and the CBD as well as 204 trains.

The Auckland Harbour Bridge carries a similar volume of road traffic, although it is estimated that half the people crossing the bridge in the morning peak hour are on buses.

The owners and managers of these assets must ensure that bridges are safe, while maintaining acceptable levels of service for the duration of the expected life of the asset.

If appropriate asset management strategies are implemented, it is possible to restore an asset to near its original condition and maintain its functionality for the remaining service life and, possibly, even beyond.

Working with industry and academia to research all aspects of corrosion, the Australasian Corrosion Association Inc. (ACA) provides an extensive knowledge base that supports best practice in corrosion management, thereby ensuring all impacts of corrosion are responsibly managed, the environment is protected, public safety enhanced, and economies improved.

Recognition of the need to effectively maintain road and rail infrastructure is increasing, as witnessed by the announcement by the Australian Federal government of further funding of its national Bridges Renewal Program.

Darren Chester, former Federal Minister for Infrastructure and Transport, notes that the Australian government’s funding would see an additional 186 projects added to the replacement or upgrade work being carried out on 201 bridges already.

The new funding is in addition to the A$216 million already committed under the first two rounds of the program.

Another was the initiation by Raed El Sarraf, Corrosion and Asset Integrity Consultant with WSP Opus in New Zealand of a Big Bridges Workshop in 2017 that was held in Sydney and attended by representatives of the stakeholders in the larger, iconic bridges in the region, including the Sydney Harbour Bridge, Auckland Harbour Bridge, Brisbane’s Story Bridge and Melbourne’s Westgate Bridge.

The two most common causes of concrete corrosion are carbonation and chloride or ‘salt attack’.

The alkaline (high pH) conditions in concrete forms a passive film on the surface of the steel reinforcing bars, thus preventing or minimising corrosion.

Reduction of the pH caused by “carbonation” or ingress of chloride (salt) causes the passive film to degrade, allowing the reinforcement to corrode in the presence of oxygen and moisture.

Leaching of the alkalinity from concrete also lowers pH to cause corrosion of steel reinforcement.

Stray electrical currents, most commonly from electrified traction systems, can also breakdown the passive film and cause corrosion of steel reinforced concrete and prestressed concrete elements.

As reinforcing bars rust, the volume of the rust products can increase up to six times that of the original steel, thus increasing pressure on the surrounding material which slowly cracks the concrete.

The most exposed elements usually deteriorate first, and it may take 5 to 15 years for the effects of reinforcing steel corrosion to become visibly noticeable. Cracks eventually appear on the surface and concrete starts to flake off or spall. Significant section loss can also occur where there is localised pitting or localised corrosion at cracks and surface defects.

Ultimately, structural failure may occur without any visible consequences of corrosion on the surface of the concrete.

Pits usually start out quite narrow, but with time coalesce to form larger ones and result in section loss over a greater (anodic) area.

Green adds that various repair and protection technologies and approaches are possible during the lifetime of a reinforced concrete structure, depending on the type of corrosion mechanism.

There are also remedial options to stop corrosion of reinforcement.

In addition to the range of repair and protection approaches, the latest concrete structures incorporate new materials and production methods which improve longevity and performance.

As a result of the research into concrete additives, construction companies and engineering consultancies have access to all the latest technologies that yield a suite of proactive and reactive processes and procedures to maximise the durability of reinforced and pre-stressed concrete.

The physical aspects of applying a coating or repairing a section of steel or concrete present their own challenges for owners and operators of bridges.

The towers and stays of suspension-type bridges often require staff to have advanced abseiling skills so they can access them.

New Zealand has approximately 2300 bridges of varying size associated with the country’s highways.

A large proportion of the bridges are concrete decks on steel frames and supports or pre-stressed concrete structures, in addition to bridges made of conventional reinforced concrete and timber.

According to Willie Mandeno, Principal Materials and Corrosion Engineer with WSP Opus, the maintenance and monitoring of these structures continually adapts to changing conditions and technologies.

The iconic Auckland Harbour Bridge is a steel truss and box girder design.

For many years, the maintenance of this bridge involved a continuing program of painting, where applicators started at one end and when they got to the other end, went back to the beginning again.

According to Mandeno, this has changed. “Old oil-based paints became very brittle and could crack then delaminate,” he says.

“In the late 1990s they changed to a moisture cured urethane which gives approximately a 20-year lifespan before the bridge needs to be repainted.”

While the time between recoating is now much longer, it is still necessary to continually monitor the old coatings to ensure adhesion is maintained.

“When re-coating, the ideal is to just replace the top coat,” Mandeno says, “but we usually have to do some maintenance work first, such as cleaning and re-priming of edges and around rivet heads.”

Early solvent-based paints used to contain chromates and lead, along with a range of other hazardous chemicals.

“We have had to balance protecting the environment with the reduced performance of water-based coatings,” Mandeno explains.

“One solvent-free long-life coating that we now recommend for use in coastal areas is thermal sprayed zinc.

“One limitation of this material, and the alternative high-build inorganic zinc silicate coatings, is that it is that they are only available in shades of grey.”

Many roads throughout the region are being upgraded to allow for longer and heavier trucks.

All road authorities face similar challenges when managing the risks of ageing infrastructure designed to a much lower standard, whilst still providing access for modern heavy vehicles.

Short span structures like culverts are only exposed to one axle group at any one time whereas longer span structures built during the past century are now required to carry substantially more load than they were originally designed for. 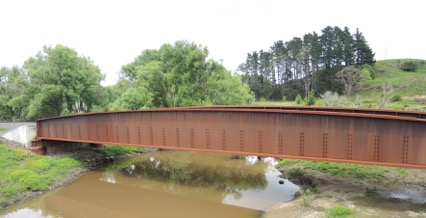 Mandeno says that many of New Zealand’s older timber rail bridges nearing the end of their useful life are being replaced by ‘weathering steel’ girder bridges which should provide a longer operational lifespan.

Officially known as “structural steel with improved atmospheric corrosion resistance,” weathering steel is a high strength, low alloy steel that, in suitable environments—those not exposed to high levels of salinity and pollutants—may be left unpainted allowing a protective rust “patina” to form and minimise further corrosion.

Alloy components such as copper, chromium, silicon and phosphorus form less than two per cent of the steel but it retains appropriate strength, ductility, toughness and weldability so that it can be used for bridge construction.

All structural steel rusts at a rate determined by the amount of moisture and oxygen to which the metallic iron is exposed.

As this process continues, the oxide (rust) layer becomes a barrier restricting further ingress of moisture and oxygen to the metal, and the rate of corrosion slows down.

The rust layer that forms on most conventional carbon-manganese structural steels is relatively porous and flakes off the surface allowing a fresh corrosion cycle to occur.

However, due to the alloying elements in weathering steel, a stable rust layer is produced that adheres to the base metal and is much less porous.

This layer develops under conditions of alternate wetting and drying to produce a protective barrier which impedes further access of oxygen and moisture.

It is possible that if the rust layer remains sufficiently impervious and tightly adhering, the corrosion rate may reduce to an extremely low one.

It can be relatively simple to calculate loads and stresses on bridges when weights are distributed evenly across the structure, but road authorities also have to deal with heavy and over-dimension loads.

Movement of such vehicles requires special planning as there are some roads and bridges that are physically unable to support massive weight concentrated into a small area.

Modern technology can assist in managing some structures sensitive to vibration from heavy vehicles.

Electronic sensors can be set up to monitor vibrations and other stresses on structures so that a large number of data points are logged that can be downloaded for analysis.

Sensors can also be connected to remote cameras that are triggered whenever a threshold vibration level is exceeded to identify which vehicles are producing these effects.

It is strongly recommended that a durability plan be developed which then becomes a critical tool in supporting an overarching asset management strategy.

The plan should clearly outline likely corrosion-related risks and agreed mitigation approaches as early as possible in an asset’s lifecycle, ideally during the planning and design stage.