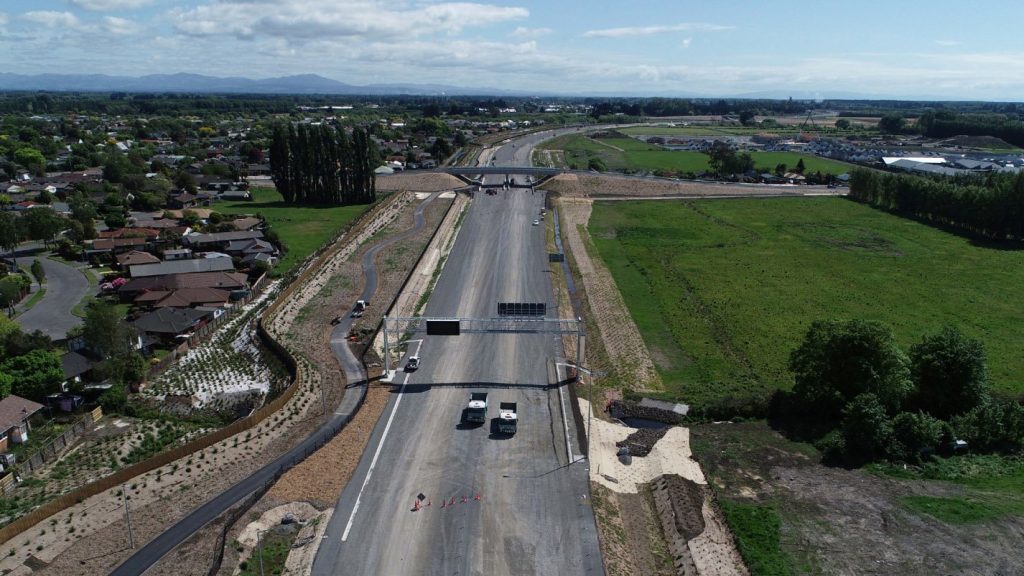 The early opening is to help bed in the chip seal surface. Due to the loose gravel, a temporary 50km/h speed limit will be in place. Depending on the road condition, this may be increased to 70km/h. The lanes will shift during the day so that the traffic beds in all four lanes.

On Saturday 12 December, between 2 and 6pm, Waka Kotahi are planning an open day where people will be able to walk or cycle on the motorway.

After the open day, the motorway will be closed to allow the finishing touches. All four lanes of the motorway and the adjoining shared path will open on Thursday 17 December.

The Christchurch Northern Corridor extends the Northern Motorway through to QEII Drive and Cranford Street and is designed to make travel times in and out of Christchurch shorter.

The Northern Corridor is the first alliance contract of this size in the South Island. It is an alliance between the NZ Transport Agency, Christchurch City Council, Fulton Hogan, Aurecon and Jacobs.

The project brings many benefits to the Christchurch and Canterbury community by unlocking space to provide safe solutions for all travel modes. The Northern Corridor includes options for cyclists, pedestrians, private vehicles and freight, and allows for improved public transport routes and infrastructure. It will make travel times in and out of Christchurch more reliable via all main routes – the Northern Corridor, Main North Road, Marshland Road and the Western Belfast Bypass (SH1).

This new motorway and its connections will be built to high modern safety standards and will move heavy traffic off suburban roads making them safer, encouraging walking, cycling and the use of public transport – especially through Redwood and Belfast. Improved efficiency of freight in and out of Christchurch and Lyttelton Port, and better access to the industrial growth area in Belfast is also expected.

The Christchurch Northern Corridor will also unlock future transport solutions the community wants; options for cyclists, pedestrians, private vehicles, freight and public transport. It is critical to supporting the continued growth of Christchurch as a liveable and accessible city, a business centre, the export hub for the South Island’s economy, and to improving journey times for commuters. Many of these commuters have rebuilt their homes in North Canterbury following the earthquakes.